The opening game of inaugural Oxigen Masters Champions League was played on 28 January 2016 which was won by Gemini Arabians by 78 runs. Gemini defeated Libra Legends in the first match of MCL Twenty20 to register first win in the competition. 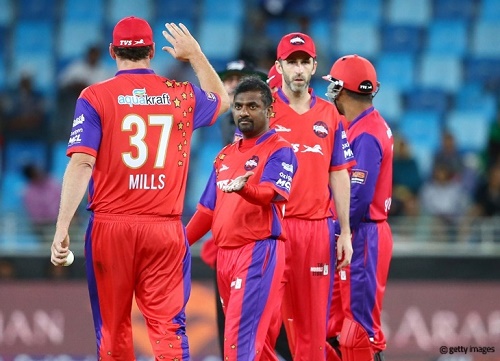 Winning the toss, Libra Legends captain Jacques Kallis chose to bowl first. His decision seemed to be proven wrong when Gemini Arabians openers Virender Sehwag and Richard Levi smashed 50 plus runs in the first 5 overs. Unfortunately Sehwag got dismissed on 21 when team was on 54. After this Sri Lanka’s legendary cricketer Kumar Sangakkara came to bat and he started o build his innings.

Both Levi and Sangakkara started to hit the ball all over the park and took team’s total past 100. Richard Levi completed his fifty and made 62 runs in 43 balls before getting dismissed by Brad Hogg. On the other Sangakkara was looking more dangerous and he smashed 22 runs in an over of Ryan Ten Doeschate. In that same 17th over’s last ball, Ryan dismissed him.

Kumar Sangakkara made 86 in 43 balls with the help of 7 sixes and 6 fours. Towards the end of innings, Brad Hodge did some serious damage as he made 46 runs in 19 balls in which 4 big sixes were involved. After completion of 20 overs, Gemini Arabians put 234 runs on the scoreboard for the loss of 3 wickets.

In the chase of 235 target, Libra Legends managed to score 156 runs for the loss of 8 wickets in 20 overs. Ryan Ten Doeschate was the highest run scorer for Libra who made 53 runs in 37 balls. Kyle Mills, Rana Naved Ul-Hasan and Muttiah Muralitharan shared 2-2 wickets each for Gemini Arabians in the match. Kumar Sangakkara was named man of the match for his brilliant 86 runs inning.

Player of the Match: Kumar Sangakkara