Gemini Arabians are set to play Leo Lions in the final match of inaugural Oxigen Masters Champions League on 13th February 2016 at Dubai International Cricket Stadium in UAE. The match has been scheduled to kick off at 19:30 local time, 15:30 GMT and 21:00 IST. 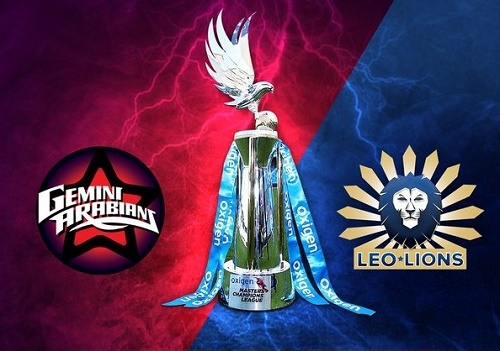 In-form Gemini Arabians will be taking on Leo Lions in the trophy decider match on Saturday. The winner of match will make one team champion of first Masters Champions League. Team Arabians are in the terrific form and their batsmen are scoring runs at a great pace that put extreme pressure on opposition. Gemini haven’t lost single match in the competition so far.

Captain Virender Sehwag is in destructive form and scoring at good strike rate. He made crucial 83 runs in 50 balls in the semi-final match against Sagittarius Strikers which helped the team to reach the final with 10 runs victory. Viru also smashed hundred before few days back. Middle order batsman Kumar Sangakkada also made 62 runs in that match. Sangakkara is the leading run scorer in the tournament.

On the other hand Leo Lions worked really hard to make it through to the finals. They defeated Virgo Super Kings last night by 17 runs in the second semi-final to be in the final. James Franklin will be the key player once again for Leos as he smashed match winning 65 in 48 balls against Virgo.

Let’s have a look at the expected playing line-ups for both teams.

Gemini Arabians will be hot favorite to win the final match of tournament. As per Twenty20wiki.com‘s prediction they have got 60 percent winning chances over Leo Lions.

Pakistan based viewers will be able to catch the live action of Masters Champions League final on GEO Super and PTV Sports from 8:30 Pakistan time (PKT).

South Africa based viewers will be able to watch live game on SuperSports.

The live streaming of Gemini vs Leo final match in Oxigen masters champions league can be watched online on sonyliv.com in Indian sub-continent territory.

For international viewers, www.cricketgateway.com is the best platform to watch live stream of MCL 2020 final.