The first semi-final of inaugural Masters Champions League is scheduled to take place on 11 February 2016 between Gemini Arabians and Sagittarius Strikers. The knockout match of MCL 2016 has been scheduled to kicks off at 19:30 local time, 15:30 GMT and 21:00 IST. 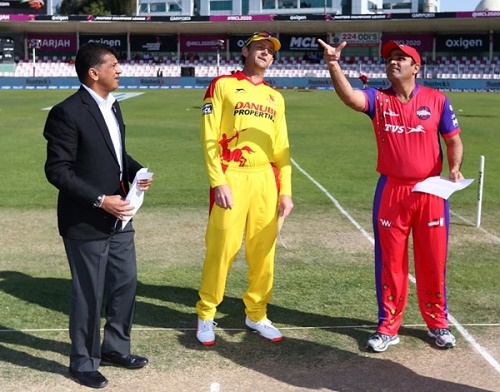 Gemini Arabians are in terrific form and team won all group matches in the tournament to top the points table in first Masters Champions League edition featuring 6 teams. Captain Virender Sehwag is in tremendous form and he scored second century of MCL championship against Strikers in the group match. So Sagittarius Strikers will be hoping to get Viru’s wicket early in the match.

Tournament’s leading run scorer Kumar Sangakkara once again will be crucial for Gemini side. He has scored 294 runs so far in the 5 matches at an average of 73.50 in which he smashed 4 fifties. Brad Hodge will also be a crucial player in the middle overs for Gemini Arabians.

On the other hand Sagittarius Strikers will be highly depending on their skipper Adam Gilchrist who hasn’t performed well in the tournament. But the Australian player is a gem of big occasions and loves to score big runs on big occasions. No one can forget 2007 cricket world cup final’s hundred against Sri Lanka as he was out of form before that inning.

Sri Lankan legend Mahela Jaywardene will be the key batsman in Sagittarius team as he is the second leading run scorer in the first Masters Champions League after Kumar Sangakkara. Mahela also became first player to score century in MCL. So he’ll be the crucial batsman for strikers.

Krishmar Santokie will be the bowler for Sagittarius Strikers to watch out in the semi-final as he took first hat-trick of MCL against Gemini Arabians group match. Daniel Vettori, Shane Bond, Tino Best will be the key bowlers for men in yellow in the crucial knockout match.

Gemini Arabians will be favorite to win and they have got 60 percent winning chances over Sagittarius Strikers in the first semi-final cricket match of Oxigen masters champions league 2016.

Sony Six in the official broadcasting partner of MCL and it will air live cricket match on 11th February from 9:00 PM IST in Indian sub-continent region. SonyLiv.com to stream live Arabians vs Strikers semi-final match.

TEN Sports to telecast this match in Middle East region.

Pakistan based cricket viewers can tune to PTV Sports or Geo Super to catch the live action of semifinal in 2016 MCL.