International Cricket Council have launched the official logo for ICC World Twenty20 2016 that will be played in India in March-April. ICC release the logo on organization’s official twitter handle. The inaugural game of tournament will be played on 11th March and after 22 days Kolkata’s Eden Gardens will host the final of 2016 T20 world cup.

This is the first occasion when India is chosen as the host of prestigious t20 cricket championship organized in every two years. The first edition of ICC World T20 was hosted by South Africa in 2007 which was won by India. Rest four editions were hosted by England, West Indies, Sri Lanka and Bangladesh. In 2014 Bangladesh hosted the wt20 which was won by Sri Lanka, hence Sri-Lankan team will be the title defending team in competition.

Board of Cricket Control in India is happy to have 2016 twenty20 world cup in India. BCCI secretary Mr. Anurag Thakur said earlier, “BCCI is extremely proud to host this prestigious event. We want this World Twenty20 to be a memorable experience for our participants and fans. I am confident that all the venues nominated will deliver a world class event.” 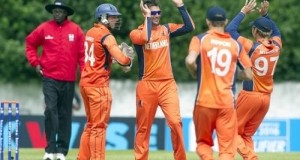