India have beaten Bangladesh in the first t20 match of Micromax Asia Cup 2016 on 24 February played at Sher-e-bangla stadium. India won by 45 runs in this match to get 2 points in the points table of tournament. Rohit Sharma was awarded man of the match for his brilliant 83 runs in 55 balls. 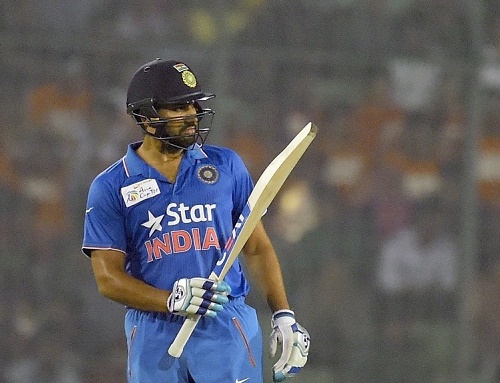 On Dhaka’s green top wicket Bangladesh won toss and asked India to bat on. Visitors lost three quick wickets on 42 runs score in the 8th over of the match. Rohit Sharma was still on the crease and trying to hit to ball. Yuvraj Singh had brilliant opportunity to get back in the form and he tried it to score fast runs but failed to do it. He returned pavilion after scoring 15 runs.

Rohit Sharma was smashing ball all over the park and decision of sending Hardik Pandya ahead of MS Dhoni, was proven right. Pandya hit some glorious shoots in the middle that helped India to set big target for Bangladesh. Rohit scored excellent fifty to help Men in Blue and putting 166 runs on the scoreboard for the loss of 6 wickets in 20 overs. Captain MS Dhoni hit six on the last ball of the innings.

Chasing 167 runs target on this green pitch, Bangladesh team managed to score 121 runs in 20 overs for the loss of 7 wickets. Sabbir Rehman was the highest run scored for home team as he made 44 in 32 balls. Ashish Nehra took 3 wickets in his 4 overs spell. Hence India defeated Bangladesh in this opening match of 2016 Asia Cup.

Indian team will play their next match against arch rivals Pakistan on 27 February 2016.