Once again Sunrisers Hyderabad and Kolkata Knight Riders are set to take on each other in ninth Vivo IPL season and this time, it’s a crunch game. Whoever loss the Wednesday’s game, will out from the competition and winner will proceed to the qualifier-2. Two times SRH and KKR met in this Indian Premier League season and on both occasions, Kolkata Knight Riders succeeded to beat Hyderabad.

Just before few days back, these two sides met each other in a knockout match for KKR, in which Hyderabad failed to beat them. If SRH defeated them, Kolkata would not be in eliminators. Even Sunrisers will also not be playing eliminators because they will finish with 18 points and top the points table. But now those things don’t matter for both sides as they are in knockout match and whoever wins, will progress to second qualifier. 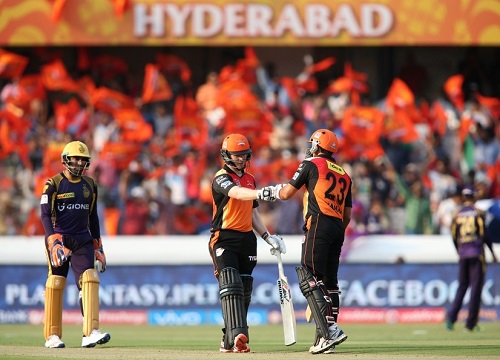 Sunrisers Hyderabad skipper David Warner is in sensational form and till date, he has scored 600+ plus runs in this season and stand second in leading run scorers tally. Shikhar Dhawan is also in good touch and scored brilliant fifty in the last league stage match against Kolkata. So both openers are in good form for Hyderabad but still the problem with them is batting line-up. Middle order hasn’t contribute a lot the way it was expected.

Although Yuvraj Singh and Kane Williamson have played some good knocks in this season but they are not consistent. Naman Ojha has not played as per his potential. So SRH will once again be depending a lot on their openers to give good start and at least one of three Shikhar, Warner and Yuvi play till the end overs. Bowling is the biggest weapon for Hyderabad though Ashish Nehra is ruled out from the season. Mustafizur Rahman, Barinder Sran, Bhuvneshwar Kumar and Henriques are the key bowlers for side. Karn Sharma and Yuvraj Singh’s spin bowling can be handy for Kolkata to handle on Delhi’s pitch.

On the other side of coin, Kolkata Knight Riders are missing their prime all-rounder Andre Russell a lot. They will definitely look forward for him to play in a crucial knockout match. Gautam Gambhir, Robin Uthappa, Manish Pandey and Yusuf Pathan are the key batsmen for KKR just like the whole season, especially Yusuf Pathan who has played some terrific innings this season.

Score: Firoz Shah Kotla Stadium wicket has been playing better these days and on an average game we can expect. It will not be a high scoring match but still we can see some big shoots from both sides. Sunrisers and Knight Riders have got some top class hard hitters in the side and we can expect 160-170 runs match for this eliminator game in Vivo IPL 9.

Win Chances: Both Sunrisers Hyderabad and Kolkata Knight Riders have got similar kind of tournament and both teams have capabilities to beat each other. KKR beat twice SRH this 2016 IPL season and can do it again. As per our predictions, Sunrisers Hyderabad will do better in the eliminators and beat Kolkata to through qualifier-2.