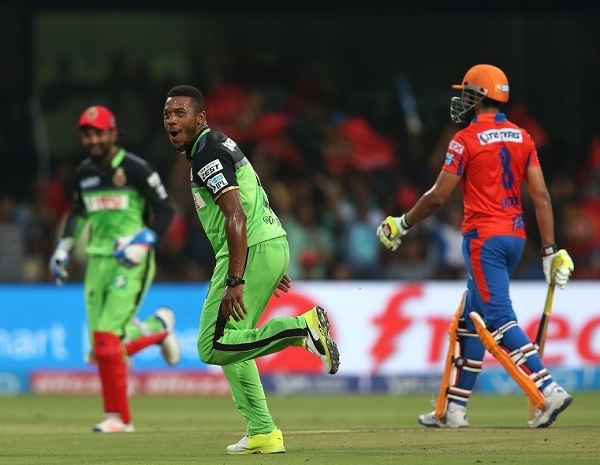 Batsman: Royal Challengers have got most dangerous batting line up in the context of twenty20 format. Their top 4 batsmen in the batting line-up are so destructive and effective that they can win the game for team in just few overs. Skipper Virat Kohli is in tremendous form and he is the leading run scorer in the competition with 919 runs. Gayle and De Villeirs have also played some terrific knocks in the league so far, especially Mr. 360 de Villiers who scored ton against Gujarat in the previous head to head fixture.

So these three guys will be at the top with Gayle and Kohli to open the innings followed by AB De Villiers. Wicket-keeper batsman KL Rahul has also shown character with bat in the 9th IPT20 season and scored few fifties too. So will be crucial in the middle order along with Shane Watson. Sachin Baby will also play crucial part at the lower order batting line-up if he gets chance. Stuart Binny can also hit the ball all over the park if he bats at the upper order.

Bowlers: Well Royal Challengers haven’t been known to have good bowling line-up in the tournament. But RCB bowlers did very well against Gujarat in the last match to seal 144 runs victory and all out GL on 96. Obviously batsmen did their job and made very difficult for Gujarat to chase 248 runs in 20 overs. So it will be interesting to watch out how Chahal, Aravind, Varun and Jordan bowl today.

Shane Watson and Stuart Binny will also be crucial bowlers in the line-up for Bangalore.

Batsman: Gujarat Lions have also got fire pack batting line-up insights of Aaron Finch and Brendon McCullum at the opening slot while Suresh Raina and Dwayne Smith are dangerous players in the middle overs. Although none of the Gujarat‘s batsmen in the top 5 leading run scorers in the competition but still all batsmen take their responsibility in different different games.

Wicket-keeper batsman Dinesh Karthik has also played some terrific knocks in the tournament that led the side towards victory. Ravindra Jadeja and Dwayne Bravo are the crucial lower middle order batsmen for Lions in a pressure match like this.

Bowlers: Both RCB and Gl have got similar kind of bowling status but still Gujarat looks quite better on this as they have got experienced T20 bowlers like Dwayne Bravo, Ravindra Jadeja and Praveen Kumar who can bowl economical overs.