Shikhar Dhawan and Prithvi Shaw delivered magnificent performances as they powered Delhi Capitals to a commanding seven-wicket win over Chennai Super Kings (CSK) in the Indian Premier League (IPL) here at the Wankhede Stadium on Saturday. 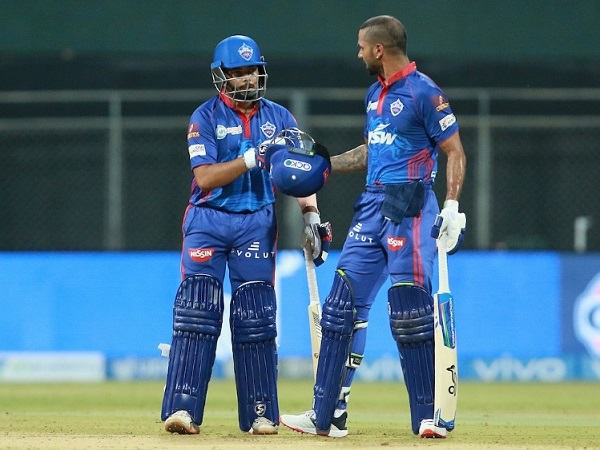 Dhawan and Shaw played knocks of 85 and 72 respectively to help Delhi Capitals chase down the target of 189 runs, set by the MS Dhoni-led team.

Chasing the target, openers Dhawan and Shaw gave Delhi Capitals a brilliant start and scored regular boundaries. The duo took the team over the 50-run mark in just the fifth over.

Delhi Capitals’ openers dominated the CSK bowlers and it was just the start that the team needed as they were chasing a massive target. After the completion of 10 overs, Delhi Capitals’ score read 99/0, with Shaw completing his half-century.

CSK bowlers utterly failed to stop Dhawan and Shaw from scoring runs as the duo kept hitting boundaries. In the 14th over, Dwayne Bravo handed CSK with the first breakthrough as he dismissed Shaw, putting an end to the 138-run partnership.

Skipper Rishabh Pant then joined Dhawan on the field. Despite the fall of the wicket, Delhi Capitals did not let it hinder the run rate as Dhawan and Pant kept the scoreboard running. Dhawan scored two consecutive boundaries to Shardul Thakur in the 17th over. However, the bowler made a comeback and got hold of Dhawan in the same over which brought Marcus Stoinis in the middle.

In his next over, Shardul also picked the wicket of Stoinis. However, it was too late for CSK to make a comeback in the game as Pant struck a boundary to take Delhi Capitals over the line.

Earlier, Suresh Raina smashed a sensational fifty in his comeback game before Sam Curran’s masterclass in the death overs powered Chennai Super Kings (CSK) to 188/7 in their 20 overs.

After eight overs, CSK were 48/2 but first Raina and then Sam Curran played scintillating knocks to steer the MS Dhoni-led side to 188/7 despite the team wobbling after the 15th over.

While Raina ensured both spinners Ravichandran Ashwin and Amit Mishra feel the heat as he took them on after CSK was put on the back foot early in the innings, Sam Curran and Ravindra Jadeja took on the pacers in the death overs.

Asked to bat first, CSK got off to the worse possible start as they lost both openers Faf du Plessis and Ruturaj Gaikwad before the completion of the third over.

While Avesh Khan caught du Plessis in front of the stumps, Chris Woakes dismissed Gaikwad to leave CSK reeling at 7/2. However, Suresh Raina and Moeen Ali counter-attacked with the England all-rounder leading the charge. The duo steadied the ship for CSK as they added 53 runs for the third wicket in 38 balls. Moeen, however, got out after smashing Ashwin for two back-to-back sixes.

Meanwhile, Raina smashed his first IPL half-century since 2019 in just 32 balls and formed another fifty partnership with Ambati Rayudu. Rayudu got out while trying to accelerate the innings and a huge mix-up between Raina and Ravindra Jadeja resulted in another wicket. Raina departed after scoring 54 runs.

Minutes later Avesh cleaned up MS Dhoni as CSK lost three quick wickets. After Dhoni’s wicket, CSK, who were racing to a big score, scored seven and five runs in the 17th and 18th over respectively. But Sam Curran and Jadeja smashed boundaries to steer CSK to 188/7 in the allotted 20 overs. Woakes clean bowled Sam Curran on the last ball of the innings.

Previous: IPL: London Mayor wishes to host Indian Premier League matches
Next: Ben Stokes ruled out from IPL 2021 after his finger got injured