Misbah hopes Pakistan to do well in World Twenty20 2016

Pakistan’s one of the popular captains Misbah-Ul-Haq believes that national team will do better in the upcoming ICC World T20 championship in India and also he is expecting Pakistan to reach in the final of ongoing Asia Cup 2016. In his recent blog at cricket.com.au, Misbah wrote that bowlers did well during the first match of Asia Cup against strong Indian batting line-up and would do in future as well. 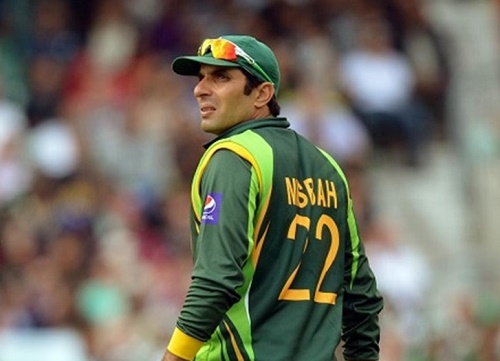 “Although Pakistan lost the opening match against India in the Asia Cup, they shouldn’t lose hope. That their bowlers made 83 look difficult against a strong batting team like India, is something that will encourage them in the next games,” Misbah wrote.

In the match against arch rivals, Pakistan batting line-up completely collapsed which really hurt the team most. Men in Green lost 6 wickets on the score of 42 and just managed to put 83 runs on the scorecard. But bowlers did brilliant job especially Mohammad Amir who took 3 wickets in the first 3 overs of the Indian innings.

Misbah said, “After this bowling performance I think the pressure on our batsmen will be less. The batsmen need to understand that the pitches in the Asia Cup are different from the Pakistan Super League and even if they score 130 or 140 their bowlers can defend it. I still feel that Pakistan can make the final of the Asia Cup, and will do well in the World Twenty20 as well.”

Pakistan’s test team skipper has also said that Asian teams have been playing well, especially he enforced on Indian team. He has mentioned that India is having good batting line-up and spin bowlers are doing great for Men in Blue. ICC World T20 2016 hosts India will be very strong in their home conditions and the support crowd will give them.

“All the Asian teams appear to be in good shape in the WT20, especially India, because they can give a tough time to any team in the subcontinent. They have a brilliant batting line-up and spin-bowling attack, and that’s why I feel they are the team we need to look to. But then it is T20 cricket and any team can upset any other on the given day. You can’t predict much in this format and that is not simply a diplomatic statement.”

“The team Pakistan has selected for the Asia Cup and World T20 has in-form players and I feel it has become even better after a few late changes. The players will enter these tournaments on the back of the PSL experience which will surely help them. You will soon see the PSL’s positive effects,” Misbah added.