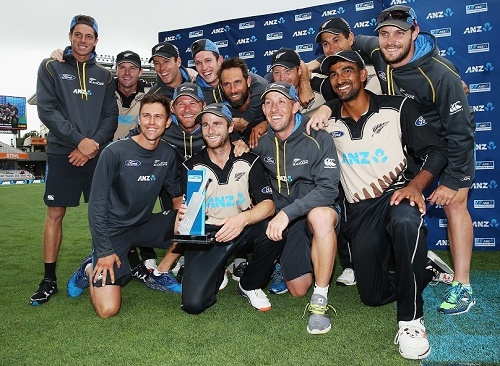 Kiwi batsman Colin Munro was awarded man of the match for his quick firing match winning innings. He smashed 50 runs in just 14 balls. He hit 7 sixes and one boundary in his exclusive inning.

New Zealand was solid from the starting of the match and everything went in their favor. Kiwi captain Kane Williamson won toss and asked visitors to bat. Sri Lanka got very bad start in the match and they lost two wickets in power play overs in which they managed to score just 33 runs. As the inning progress, home team dominated the visitors and dismissed six batsmen till the end of 11 overs.

All-rounder Angelo Mathews was standing alone to give some fight to Kiwis. He remained till the end of innings and scored valuable 81 runs in 49 balls with the help of 4 sixes and 7 boundaries. This inning helped Sri Lanka to post 142 runs on scoreboard after completion of 20 overs for the loss of 8 wickets. Grant Elliott was the successful bowler for New Zealand who took 4 wickets in his four overs bowling quota.

In the chase of 143 runs target, Kiwis got flying start as openers Martin Guptill and Kane Williamson started to exploit Sri-Lankan bowling attack. Guptill was more dangerous and batting aggressively. Both batsmen completed 50 runs of team in 4 overs. Martin Guptill smashed his fifty in 19 balls and before getting dismissed, he made 63 in 25 balls.

Colin Munro came to bat at first down and he was more aggressive than Guptill. Munro hit completed his fifty in 14 balls. For his brilliant batting, Munro was given player of the match award.