New Zealand has made one of the biggest upsets of ICC World T20 2016 as they defeated tournament favorites India in the opening match played at Nagpur. Kiwis beat India by 47 runs to register first win in wt20 and earn 2 vital points in group table. 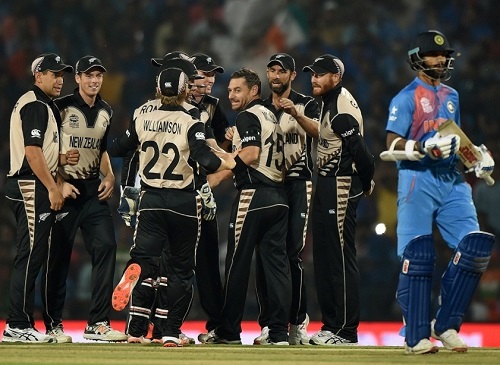 Winning the toss, New Zealand chose to bat first on this dry and spin friendly wicket. Their decision went against them as they lost 3 wickets in just 7 overs. Corey Anderson played a much needed innings of 34 runs on this bowling track to help Blackcaps to post 126 runs total to give something to their bowlers in the bag.

Indians had great chance to beat New Zealand first time ever in T20Is but they again failed to beat Kiwis. Whole team India got all out in just 18.1 overs after scoring their second lowest total in Twenty20 internationals history i.e. 79. Kiwi spinner Mitchell Santner took 4 wickets in the Indian innings to lead his team towards victory by 47 runs. Santner was awarded man of the match for his brilliant match winning bowling.