Pakistan and West Indies are set to take on each other in the second twenty20 match of three T20I match series on 24th September 2016 at Dubai Cricket Stadium, UAE. Pakistan defeated West Indies in the first t20 last night by 9 wickets and if they win today again, Men in Green will seal the series. The Pakistan vs West Indies 2nd t20 live cricket streaming to begin at 20:00 local time, 16:00 GMT and 21:30 IST. 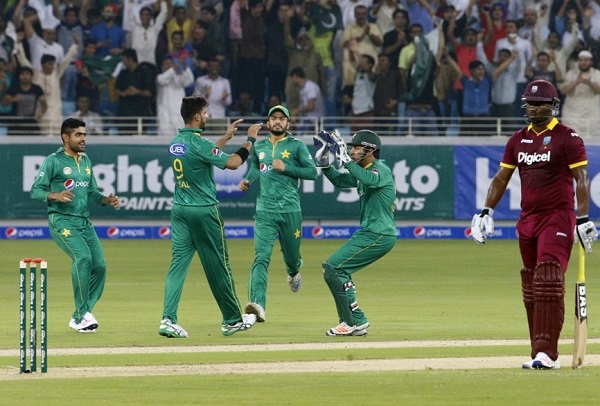 Live cricket match broadcast of Pak vs WI 2016 second t20 match will be aired online on PTV Sports in Pakistan. PTV Sports will also show live coverage of the match in Pakistan from 9:00 PM.

India based viewers will be able to watch live action on TEN Sports from 9:30 PM IST.

United States and Canada based cricket fans can tune to Willow TV to watch live telecast of Pakistan vs West Indies 2nd 20-20 match.

World Twenty20 Champions West Indies were threatened yesterday in the first t20 of series and Pakistan registered 9 wickets victory with 34 balls remaining in the game. Windies batting was destroyed in the first hour of the match when Pakistani fast bowlers got early break throughs. Caribbean team lost 8 wickets on the score of just 48 runs in 12th over.

All-rounder Dwayne Bravo built 66 runs valuable partnership with Jerome Taylor for 9th wicket that helped West Indies to post 115 runs on the scoreboard. Team couldn’t play full 20 overs quota and got all-out. Imad Wasim was sensational in the bowling as he took 5 wickets which broke the Windies backbone.

116 runs target was easy for Pakistani batsmen in the batting favorable conditions. Babar Azam smashed 55 runs in 37 balls that helped Men in Green to win the match easily and lead the 3-match series by 1-0. So both Babar and Imad will be crucial players for home team in today’s second t20 match.

Pakistan side did everything right when they chose bowl first after winning toss. Skipper Sarfraz Ahmed will be looking to see such kind of performance from the boys again on Saturday night in Dubai. Bowling and batting were out class for Men in Green last night.

On the other side, lots of questions in front of West Indies twenty20 team new skipper Carlos Brathwaite. Batsmen have to score well that can be tricky for inform Pakistani batsmen to chase down. Andre Fletcher, Johnson Charles, Marlon Samuels and Kieron Pollard have to make contribution tonight to help Windies post a good total.

Men in Green (Pakistan) is looking favorite to win against West Indies in the 2nd t20i match and as per our prediction they have got 65 percent winning chances.

Live cricket match score of Pakistan vs West Indies second twenty20 match 2016 will be provided by cricbuzz.com and espncricinfo.com.