Title defending champion Sunrisers Hyderabad is set to face Rising Pune Supergiant in the match-24 of Vivo IPL 2017 on Saturday in Pune. Orange army is having a great winning momentum in the tournament while Pune have been struggling a lot and lost too many games. Hyderabad have won 4 matches meanwhile Pune have secured just 2 wins.

Steve Smith won’t be playing this match for Rising Pune Supergiant and Ajinkya Rahane will be leading the side. RPS had fantastic game other night when they defeated Royal Challengers Bangalore while defending a challenging total. 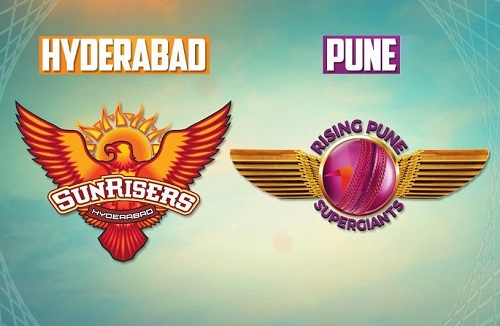 Sunrisers Hyderabad is in terrific form as their batsmen and bowlers have been doing great. Warner, Dhawan and Yuvraj are in good touch and at least one of them is scoring runs at good pace in every game. The way Kane Williamson batted in the last match, surely he is going to have more matches in the league for SRH.

Sunrisers Hyderabad now look quite strong as their middle order looks strong after Yuvraj Singh’s return to the side and eventually he is looking in good touch. The way he played last game, it was quite impressive. Shikhar Dhawan is also in good form and played some good innings in the last two matches. He was terrific in the last match and scored brilliant fifty to win the match.

Faf Du Plessis will be replacing Smith in Pune Supergiant playing XI for Hyderabad’s key match. Ben Stokes and MS Dhoni need to score runs, especially MSD who is not looking in good touch. Ajinkya Rahane has played some good innings in the tenth IPLT20 edition but still he needs to be consistent.

Sunrisers Hyderabad (SRH) are favorites to win against Rising Pune Supergiant and they have got 60 percent winning chances in the 24th match IPL 2017.

The projected score at MCA stadium in Pune is expected to be around 160.