Big match in prospects of Vivo IPL-9 as Royal Challengers Bangalore are set to take on title defenders Mumbai Indians in the 41st game on 11 May 2016, Wednesday at Chinnaswamy Stadium. RCB is coming in this match from beating Kings XI Punjab by just 1 run while MI faced 85 runs lost against Sunrisers Hyderabad.

Virat Kohli & Company have earned 2 back to back wins in the competition to make themselves into the race for playoffs. Royal Challengers beat Rising Pune Supergiants and Kings XI Punjab in last two matches to get some momentum for IPL 2016 crucial upcoming matches. First RCB chased down a target of 193 runs comfortably by Kohli’s brilliant century and then thrilling 1 run win against KXIP, should really up the shoulders of RCB dugout. 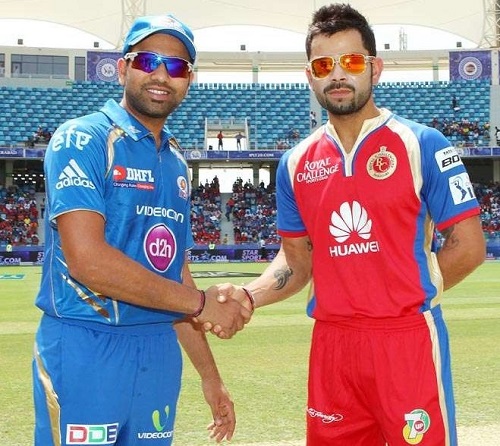 Royal Challengers Bangalore have won 4 matches out of 9 while Mumbai Indians succeed to win 5 games from 10 matches. RCB have got positive run rate and if they beat Mumbai on Wednesday, they will replace Mumbai Indians in the points table. Hence it will be a vital match for both teams in prospects to qualify for knockout matches.

On the other hand, Mumbai Indians will definitely look to bat well and forget what happened against SRH. Rohit & Company face big defeat of 85 runs which made team management to think about batting line-up. Rohit, Parthiv, Buttler, Pollard and Rayudu have to take responsibility to score big and quick runs. Team relies a lot on skipper Rohit, hence he’ll be a key player for Mumbai Indians once again.

In this 41st match of Indian Premier League ninth edition, Royal Challengers Bangalore will be favorites to win against Mumbai Indians and they have got 57 percent winning chances at Chinnaswamy Stadium in Bengaluru.