Australia and South Africa are set to play in a nail biting t20 series which is beginning from 4 March. This series will be the dress rehearsal for ICC World Twenty20 in India. South Africa vs Australia T20I series live broadcast and streaming online will be aired on various networking channels. 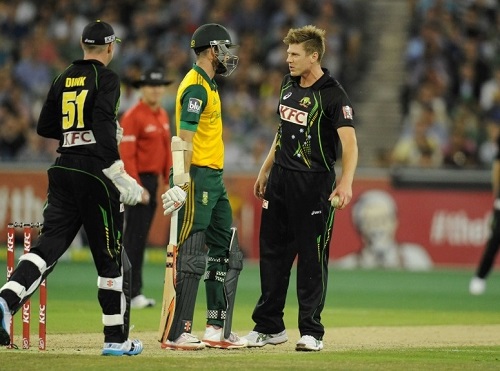 Both South Africa and Australia coming from winning momentum in this bilateral t20 series as Australia defeated New Zealand in test series whereas South Africa beaten England in T20I series. Home team Proteas will be quite favorite in this series as they have been performing well in their home conditions and especially going well in the limited overs cricket.

Proteas beat India last year in twenty20s and then won ODI and T20I series against England this year. Hence they’ll be favorite in the series. Star players in team like Ab De Villiers, Faf Du Plessis, Hashim Amla, Dale Steyn, David Miller and Imran Tahir will be the key players for South Africa in the series.

On the other hand visitors Australia will be highly depending on newly appointed captain in T20 format Steve Smith in the series. Shane Watson, David Warner, James Faulkner, Glen Maxwell, Josh Hazlewood are the vital parts of Australian side. All these will desperate to be get in good touch before going into sixth wt20 championship. Australia and South Africa have never won world t20, hence it will be interesting how they play in this bilateral series to get momentum for 2016 twenty20 world cup.

The live streaming of South Africa vs Australia can be watched online on Ten Sports from 4 to 9 March 2016.

The live score of Australia’s tour of South Africa 2016 will be provided by espncricinfo.com and cricbuzz.com