Bangladesh cricket team has created history as they have beaten Pakistan in the crucial Asia Cup match to confirm their for final. Bangladesh won by 5 wickets to enter in Micromax Asia Cup 2016 final. Soumya Sarkar was awarded Man of the Match for his match winning 48 runs. 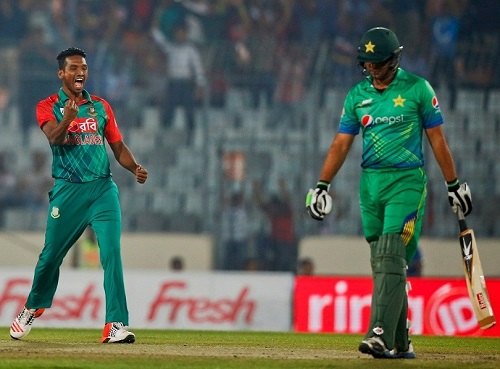 This is the second occasion when Bangladesh have reached to the final of Asia Cup. Right from the starting from match, all things went to home side’s favor apart from toss. Shahid Afridi’s decision of batting first on this best pitch of tournament till now, was good decision but batsmen clearly proved his decision wrong and top 4 batsmen returned to pavilion when Pakistan was just on 28.

After this Shoaib Malik and Sarfraz Ahmed tried to take team towards a good total. Both players added 70 runs for fifth wicket partnership. Malik made 41 in 30 balls before getting dismissed. Sarfraz Ahmed made unbeaten 58 runs that led Pakistan to put 129 runs challenging total on the scoreboard.

This was not easy target in terms of the opposition bowlers as Mohammad Amir, Mohammad Irfan were in great form. But Bangladeshi batsmen didn’t scare of it and smashed the ball all over the park. Soumya Sarkar was the hero in Bangladesh inning as he scored 48 runs which built solid platform for team to win the game. Towards the end of match, Mahmudullah hit 22 runs in 15 balls to confirm Bangladesh’s maiden entry in Asia Cup final.

Bangladesh will now face India in the final of 2016 Asia Cup on 6th April in Mirpur.