South Africa to host Australia for three twenty20 international matches series this month just head of the beginning of ICC World T20 in India. Both teams will be looking to get winning momentum before going into major ICC event. All 3 games will be played on 4, 6 and 9 March, 2016. Faf du Plessis is leading the Proteas team whereas Steve Smith to captain Aussies. 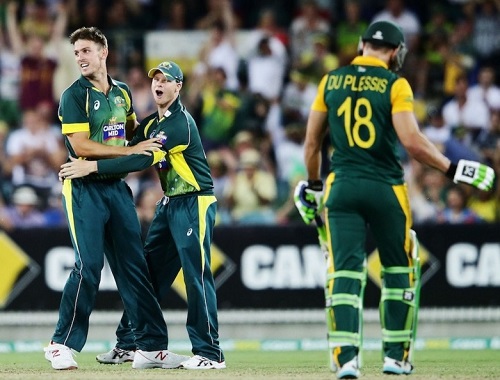 This is going to be high voltage series between two strong teams and favorites to win t20 world cup 2016. South Africa have been playing good cricket in limited overs format of the game. They have beaten strong Indian side on their home soil whereas whitewashed England recently in T20I series.

On the other hand Australian team coming from getting clean sweep from India in 3 match t20 series. But Aussies play tough cricket always and they won test series against New Zealand recently. So they will also be looking forward to keep winning momentum from tests to T20 and win series before travelling to India.

Let’s have a look at the complete squads of both teams for this series.