Two champion teams of Caribbean Premier League are set to meet each other in the match number 11 of 2017 CPLT20 championship today as 2015 CPL winners Trinbago Knight Riders to face 2014 winner Barbados Tridents. Both teams are heading into the match by winning their respective previous games. 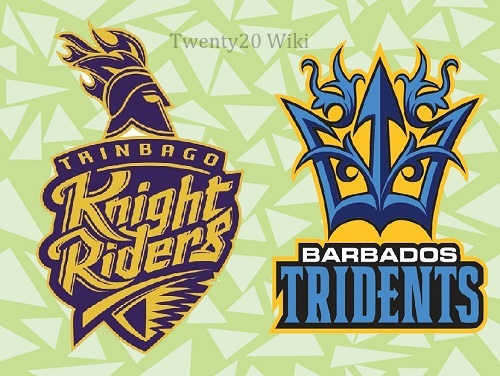 Having lost just only match against Jamaica Tallawahs, Trinbago Knight Riders will look to register their 4th victory of the season against Barbados Tridents. TKR team looks decent but their top players are not in good form. In the last match, Brendon McCullum and Darren Bravo didn’t click which they would not want in the next matches.

Colin Munro played a terrific innings that helped the side to chase 156 runs target. So on this Queens Park Oval’s wicket, Knight Riders need to play well and bat fast to put pressure on strong batting line-up of Tridents. Sunil Narine and Sulieman Benn need to bowl for TKR in this match as it will be a tough challenge for them to bowl against some destructive batsmen.

Kieron Pollard, Kane Williamson, Shoaib Malik are the top players for Barbados Tridents in this match. Pollard’s presence on the wicket is enough for his side to keep calm as he can score at great pace against any bowling lineup. Nicholas Pooran will also be crucial in the lower middle order batting order. Wayne Parnell and Ravi Rampaul are the star bowlers in BT squad.