Cricket legend Sachin Tendulkar who is in United States to promote game in the country has told ESPNcricinfo that t20 format is perfect to make cricket globalize. Indian master blaster believes that cricket game can get popular in USA and other nations as much as baseball and basketball are.

“To globalise the game, I feel T20 is the right format. The format is fast, it’s gripping, it’s got lot of energy and invariably the finishes are real close. Very rarely you get to see a one-sided game, which is what people like to see. Towards the end of most T20 games, every ball matters,” Tendulkar quoted as saying on espncricinfo.

Australia cricket legend Shane Warne and India’s Sachin Tendulkar are in USA to play in ‘Cricket All-Stars T20 League’ for the promotion of cricket sport. Ex-cricketers like Wasim Akram, Jacques Kallis, Virender Sehwag and Brian Lara will be participating in the three t20 match series beginning from 7 November. 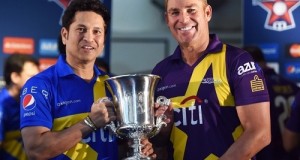