In the opening match of Vivo Indian Premier League 2016, title defending champion Mumbai Indian to take on Rising Pune Supergiants at their home on 9th April. Rohit Sharma will be leading team Mumbai in the tournament whereas new comers Pune to play under India’s limited over captain MS Dhoni’s leadership. 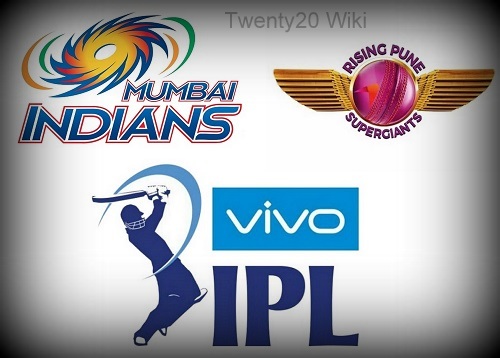 It will be an interesting to see how teams play against each other as both are having good combination of players. Mumbai Indians are depending on Rohit, Pollard, Bumrah, Harbhajan, Simmons and Buttler to help the team to get winning start in title defending campaign against Pune. Rising Pune Supergiants to rely on Dhoni, Rahane, Pietersen, Faf du Plessis, Steve Smith and Ashwin to play better in their first edition of tournament.

Wankhede’s pitch and wicket suits to batsman and we can expect big runs in the match as top cricketers and hard hitter from both sides to play in the opening match of IPL 2016. In recently concluded t20 world cup matches in Wankhede stadium, we saw that teams managed to put big runs on the board and latter on dew plays crucial role. Bowlers couldn’t grip the ball properly, hence bowling first will be the best option that skippers will definitely be looking at after winning the toss.