The second Twenty20 match of 2016 series between Australia and India is scheduled to play on 29 January at Melbourne Cricket Ground. The match will start at 8:38 GMT and 19:38 local time. There will be several international broadcasters which telecast live Australia vs India 2nd T20 cricket match on Friday. Let’s have a look at the complete details regarding the same and also get the match preview and predictions. 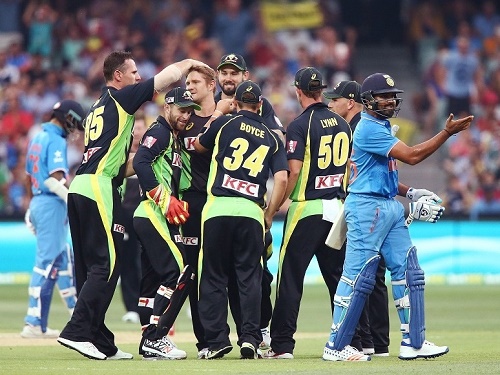 Having won the first T20I quite comprehensively, visitors will be looking to repeat their performance again in the second game on 29 January at MCG. If Indian team gets success to do that, they’ll surely win the series as well as will improve ICC T20 rankings. On the other hand Australia will be looking to stop Men in Blue from their consecutive third win on the tour.

India will once again be relying on top order batsmen like Rohit Sharma, Shikhar Dhawan, Virat Kohli and Suresh Raina. Team is much depending on in-form batsmen Rohit and Virat, especially Virat Kohli who scored unbeaten 90 runs in previous match to guide team towards big total. Captain MS Dhoni can bring back Umesh Yadav back in the side at the place of Hardik Pandya as batting line-up is quite strong and team needs a wicket taker.

Home team Australia will be looking to get victory in this do or die match. One of the biggest match winner and middle order batsman Glenn Maxwell is returning to the side for this MCG T20 game after missing first game due to injury. Australia missed him a lot in the previous match and will strengthen their batting line-up if Maxwell gets fit to play.

Middle order was collapsed for Kangaroos in the previous match as Chris Lynn, Shane Watson and Matthew Wade failed to score the runs in a big chase of 189. Shaun Tait may miss this second T20I as he conceded lot of runs in the Adelaide match.

Let’s have a look at the probable batting line-ups for both teams in this second t20 of the series.

India will be favorite to win this match and they have got 55% winning chances over Australia.

The 2nd T20 international match can be watched live on Star Sports 1/Hd and Star Sports 3/HD for English and Hindi commentaries respectively. Doordarshan will also telecast the match live in India.

Channel will be broadcasting live T20 cricket match in Australia from 7:38 PM as per local watch.

United Kingdom based viewers can tune to Sky Sports to watch the match live.

SuperSports will be telecasting live 2nd T20I between India and Australia on Friday.

The latest match updates and live score of India vs Australia 2nd T20 match can be taken from espncricinfo.com and cricbuzz.com.