The 15-member Australian squad for ICC World T20 2016 was named on Tuesday. Team was announced by keeping the fact in mind that Australia haven’t won the prestigious WT20 trophy in the past 5 editions of championship and will be playing sixth event in Indian conditions which are familiar to spin bowlers and batsmen. Hence Cricket Australia made some change and include Peter Nevill, Adam Zampa and Ashton Agar in the side. 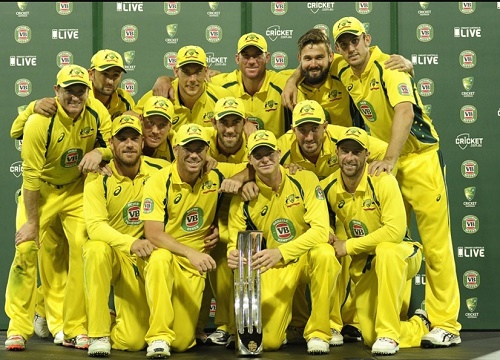 National selector Rod Marsh said, “We feel our batting depth in this squad is sufficient enough that we can have a specialist wicket-keeper in the squad. We want Australia’s best wicketkeeper playing in this tournament and we consider Peter Nevill to be the best in the country right now.”

Opener Aaron Finch was the captain of Australia till India’s series but he is no longer skipper of the side as ODI and Test captain Steve Smith is appointed captain for t20 world cup 2016. This change is made after result of India-Australia twenty20 series in which Indian team whitewashed Australia under Finch’s captaincy. Though Finch didn’t lead the side in third t20 due to injury but still selectors removed him from captaincy.

“Aaron Finch has done a very good job captaining Australia in T20 cricket. He will have benefited enormously from the leadership opportunity and will remain a highly-respected leader within the Australian squad. We think now is the right time for Steve to lead Australia in all three forms of the game as it offers us important continuity, not only ahead of the World T20, but beyond that tournament as well,” Rod Marsh added.

Shaun Marsh is also dropped from the squad for prestigious International Cricket Council event in India to make way way for inform batsman Usman Khawaja. Khawaja had brilliant Big Bash League tournament in which he scored 2 tons and fifty to guide Sydney Thunder towards title.

David Warner and Aaron Finch pair is perfect for Australia to open the innings and if require they may ask Khawaja to bat at the top. Middle order is having great experience insights of Steve Smith, Shane Watson and Mitchell Marsh. Glenn Maxwell is not in good form but he can be handy in Indian conditions.

Fast bowling will be strength for Australian team once again and ill be relying on Josh Hazlewood, Nathan Coulter-Nile, John Hastings and all-rounder James Faulkner. Kane Richardson got injured during New Zealand tour, hence will not be available for selection.

Let’s have a look at the Australia’s squad for 2016 twenty20 world cup.

Australia are scheduled to meet former world t20 champions India and Pakistan in the super-10 stage of 2016 world cup. Aussies will also play New Zealand and one qualifying team from group stage of the tournament in their group 2 matches beginning from 15th March.