Ireland cricket board have confirmed the 15-member squad for 2016 ICC World Twenty20 which is set to begin from 8th March in India. The experienced Ireland team will play under William Porterfield’s captaincy. It will be Irish team’s fifth appearance in prestigious event. 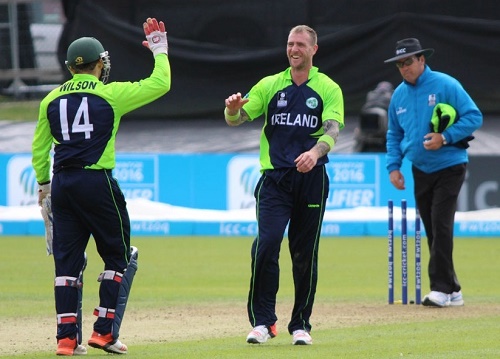 Ireland cricket team coach John Bracewell has good hopes from the side and thinks that team can go to the furthre round of championship. According him captain Porterfield and some of the senior players like O’Brien brothers, Tim Murtagh, Paul Stirling and Stuart Thompson are ready to face big challenges in the competition.

Coach said, “The squad has got a real balance to it, with that blend of youth and experience that every coach likes. Ireland are now regular performers on the world stage so there’s no fear or intimidation factors. Everyone has been given a real boost by the return of Rankin and Tim Murtagh’s rethink on retirement in this format. Porty (Porterfield) has plenty of options with the ball as so many of the squad are genuine all-rounders.”

In a recent series with Papua New Guinea team has performed very well and won all the played matches so far. Ireland have performed well in previous International Cricket Council events and beaten teams like Pakistan and England. So coach is expecting some great performance once again from the side.

“We will be well prepared for the competition, as we’re currently playing Papua New Guinea, will take on the UAE later this week, and will be India for a training camp ahead of the competition. It’s another great chance for the squad to showcase Irish cricket to a global audience, and the guys are determined to prove they belong at the top level of the sport.”

Let’s have a look at the Ireland team for t20 world cup.

Ireland are scheduled to play Netherlands, Oman and Bangladesh in the first stage of WT20 2016. And if they succeeds to get top of the group table, they’ll make their second successive way to super-10 round in twenty20 cricket world cup 2016 whose final is scheduled to conclude on 3 April.