Bangladesh have created history in the 5th match of Asia Cup as they have defeated Sri Lanka for the time ever in a twenty20 international match. Top order batsman Sabbir Rahman smashed brilliant 80 runs in 54 balls that helped Bangladesh to post match winning total on this Sher-e-bangla stadium bowling supportive pitch and won match by 23 runs. For this match winning inning, he was named man of the match. 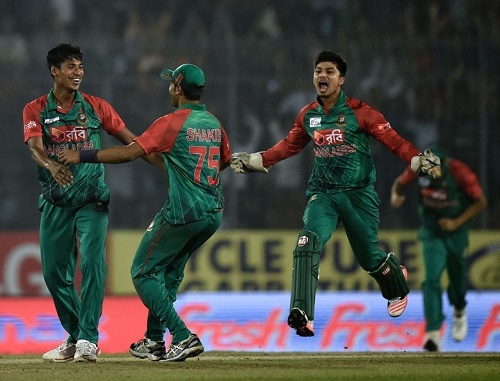 In their third match of Micromax Asia Cup, Bangladesh won toss and chose to bat first. But this decision went against them when openers Mithun and Sarkar returned to pavilion in the first two overs of the match. Bangladesh’s one of the most reliable batsman Mushfiqur Rahim was on the crease with great expectations from fans but he got run out in the 5th over.

Bangladesh was in big trouble as they lost three wickets in the first six overs. But the good thing was, Sabbir was looking in good touch and all-rounder Shakib Al Hasan was on the crease. Both batsmen tried to score runs but couldn’t get things under the way for Shakib. On the other hand Sabbir Rahman was hitting ball cleanly. He completely much needed fifty in 38 balls.

Sabbir made 80 runs with the help of 10 fours and 3 sixes. Before getting out he did his job for team and towards the end of inning Mahmudullah played wonderful short innings of 23 runs in 12 balls. This led Bangladesh to post 147 runs on the scoreboard.

It was not a difficult target for title defending champion Sri Lankan team as Sunday’s pitch was quite better than previous matches in the competition so far. They got good start in the chase and posted 65 odd runs in the first ten overs for the loss of only 1 wicket. But in between the middle overs they lost momentum and Bangladesh spinner restricted Lankan batsmen from scoring runs.

Shakib Al-Hasan took 2 wickets whereas Al-Amin Hossain took 3 wickets to confirm Bangladesh’s win in the crucial match. With this win Bangladesh got much need 2 points in the 2016 Asia Cup points table to keep their hopes alive for final.