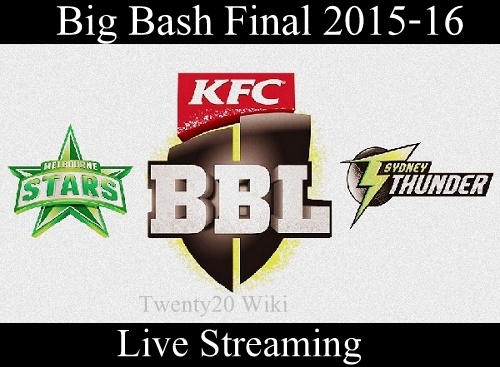 There are several broadcasting networks and television channels which will bring the live coverage of Big Bash League final today. Australia based cricket fans and lovers can tune to “Channel 10” to catch the live telecast of Melbourne Stars and Sydney Thunder BBL final. Match will start at 19:20 local time and 8:20 GMT.

Viewers in Australia may catch the live coverage of Big Bash league fifth edition final on internet on bigbash.com.au, tenplay and cricket.com.au.

India based viewers can visit www.starsports.com to watch the live streaming of Sydney Thunder vs Melbourne Stars BBL|05 final from 13:50 IST on Sunday.

United Kingdom viewers can go to Sky Sport Watch to watch the live broadcast of BBL-05 final from 9:20 BST.

The live score of Melbourne Stars vs Sydney Thunder final match can be taken from www.espncricinfo.com. The latest match updates and live scores of the Big Bash 2015-16 final will also be provided by www.bigbash.com.au and www.cricket.com.au.

Previous: India to top T20 rankings if beats Australia by 3-0
Next: Maxwell out from 1st T20 against India in Adelaide