In a nail biting finish England cricket team has defeated Pakistan in the final T2oI of series on Monday to take series home by 3-0. After completion of 40 overs both teams had identical score of 154. The match’s result was tied and super over was on the bar. English captain finished things in style in the super over and led team towards the third successive win three match 20-20 series. 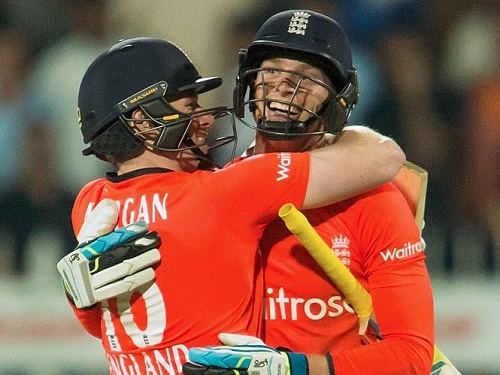 Before this England won the toss for the third time in series and chose bat again. It was worst start for visitors as Aamer Yamin took the first wicket on the very first ball of the match. He dismissed Jason Roy. James Vince and Joe Root started to play some aggressive cricket especially Root. Joe made quick firing 32 runs in 22 balls with the help of 4 boundaries and 1 six.

Just before the completion of power play overs Pakistan captain Shahid Afridi took two wickets in a row as he first dismissed dangerous Root and then Moeen Ali on the very first ball that he faced. Vince was solid at one end but wickets were falling on other end. At the end of innings lower order batsman Chris Woakes played some gorgeous shoots and guided England team past 150.

Woakes made valuable 37 in 24 balls with the help of 3 sixes and 1 four. James Vince was also dismissed in the final over of innings and he scored 46 runs in 45 balls. England posted 155 runs target for Pakistan in the 3rd T20I at Sharjah.

In the chase of 155, Pakistan got worst start and team lost 3 wickets on just 11 runs score. In such big trouble, experienced Shoaib Malik stood at one end was playing heroic innings. He scored 75 runs in 54 balls but couldn’t confirm team’s victory. At the end of innings Shahid Afridi also tried to take Pakistan over the line but he failed do it again.

David Willey was the successful bowler for England as he took three wickets in Pakistan innings. Shoaib Malik was named Player of the Match for his brilliant innings. English batsmen James Vince was awarded man of the series. England clinched T20 series by 3-0 and team will definitely full with morale when appear in next year ICC world Twenty20.

Previous: Sourav Ganguly named as MCL icon, Franchise Libra Legends launched
Next: ICC World T20 2016 is an outside chance for me: Cummins