England cricket team has defeated Pakistan in the second Twenty20 match of 2015 series to take the victorious lead of 2-0. In a nail biting finish English team beat Men in Green by 3 runs to clinch the T20 series. Liam Plunkett was announced Man of The Match for his match winning bowling spell. The last T20I of series will be played on 30 November at Sharjah. 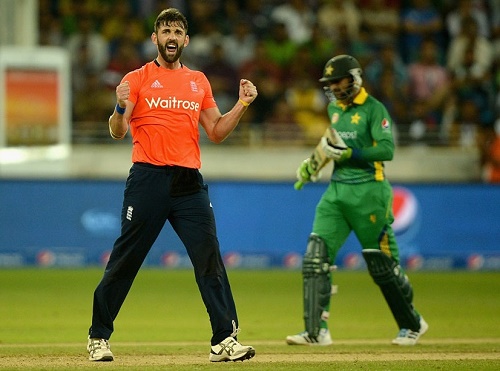 English once again won toss in the 2nd T20 and decided to bat. The decision seemed to be in the favor of visitors as openers Hales and Roy gave quick firing start. But Pakistan captain Shahid Afridi came to bowl in the 5th over and dismissed Hales. In his second over Afridi took crucial wicket of Roy.

England was in trouble as scoring rate was slow and team lost two quick wickets. James Vince and Joe Root started to play the shoots and built some runs. Shoaib Malik came to bowl in 11th over and he dismissed Root who was looking dangerous. Shahid Afridi also dismissed Vince in the 14th over of innings and now things were in the control of Pakistan.

James Vince made 38 runs in 24 balls with the help of 2 sixes and 4 fours. In this match Jos Buttler was leading English side and he led from the front as came to the crease. He smashed 33 runs in 22 balls with the help of 3 big sixes. Towards the end of innings Woakes and Billings scored some quick runs that guided England to reach 172 for the loss of 8 wickets in 20 overs. For Pakistan Shahid Afridi was the most economical and successful bowler as he took 3 wickets by spending just 15 runs in 4 overs.

In the chase of 173 runs target Pakistan got excellent start as openers Rafatullah Mohmand and Ahmed Shehzad put 50 runs in the first overs of the innings. After this great start, PAK lost quick wickets as first Stephen Parry dismissed Shehzad and then Rashid took Mohmand’s wicket. Pakistan was now on 60 in the 9th over and Mohammad Hafeez and Shoaib Malik were on the crease.

Both batsmen tried hard and built small partnership of 30 runs. But in form bowler Liam Plunkett took the crucial wicket of Hafeez in 12th over who made 25 in 20 balls. Pakistan lost two more quick wickets as Umar Akmal and Shoaib Maqsood failed to score. The match was in the favor of visitors as home team was struggling. Pakistan got one more big blow as Plunkett dismissed Malik in 17th over.

The match was in the bag of England but after so many days old Shahid Afridi was seen on the ground and he started to smashed the ball. He played just 8 deliveries to score 24 runs with the help of 3 sixes and 1 four. But he couldn’t take his team to the winning end and was dismissed in the 18th over. Pakistan lost this match by 3 runs.

Last T20 match of series will be played on Monday 30th November.