Having lost the first T20 game yesterday, Pakistan cricket team will be desperate to register win in the second twenty20 match that is scheduled to take place on 27 November 2015 at Dubai International Stadium. The match will kicks off at 20:00 local time, 16:00 GMT, 21:00 PKT and 21:30 IST.

Pakistan’s world no.2 place in ICC T20I rankings is on the side bar as if today Men in Green fails to win the match, they will lose the 2nd position in rankings and drop to 4th. The biggest problem that Pakistan faced in first game was collapse in the batting order. Batsmen were failed to spend time on the pitch and couldn’t recover from the damage done by English fast bowlers Plunkett and Topley. 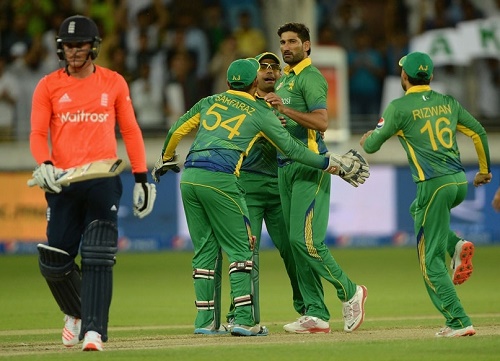 On the other hand England team would be hoping that they would not get the kind of start they had in yesterday’s match. England lost top 3 batsmen on just 19 runs score and team was in deep trouble. It was James Vince, Eoin Morgan and Sam Billings innings who took visitors to a match fighting total of 160. Certainly it became the match winning total as home team wasn’t playing as per standards in prospects of the match.

It will be interesting to watch out how Pakistan plays tonight in under pressure as they will lose T20 series against world rank no. 8 team. Captain Shahid Afridi needs to perform with his bat as well as from ball. He was completely failed as a batsman in the first t20 as returned pavilion without scoring any run.

England will be favorites to win this 2nd t20 against Pakistan. As per our prediction English team has 65 percent winning chances.

Pakistan based viewers will be able to catch the live action of second 20-20 on PTV Sports and TEN Cricket from 9:00 PM as per Pakistan local time.

Sky Sports will be broadcasting the match in United Kingdom.

India based viewers can watch the live match on TEN Cricket from 9:30 PM IST.

Previous: England beat Pakistan by 14 runs in 1st T20 at Dubai
Next: India-Australia are in Same Group of ICC World T20 2016