Rising Pune Supergiants have announced the replacement of injured Faf du Plessis for the rest of the ninth Indian Premier League season. Former Australian T20 team captain George Bailey who led Kings XI Punjab last year, will join Pune Supergiants for the upcoming matches in the season. RPS will be Bailey’s third franchise in IPL as he played for KXIP and CSK before. 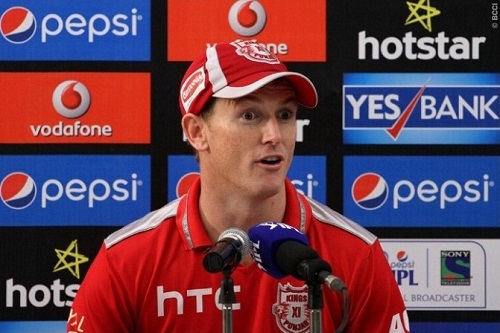 Rising Pune has been facing lots of injury issues with players as team’s key players like Faf du Plessis, Kevin Pietersen, Mitchell Marsh have been ruled out from the tournament due to various injury problems. Steve Smith also got injured in the last match which really gave team management and Dhoni a big set back.

RPS chief executive Mr. Raghu Iyer said, “Smith’s [news] been a bummer. He was just coming into his own and this happened. It is a challenging time. Before we could settle down we lost the core group of players around whom you build a team around.”

Iyer also determines that Bailey’s leadership quality can help the side and he is a valuable player in the top order. In played 34 IPLT20 games, Bailey has scored 579 runs at an average of 25.17 with the strike rate of 129.89.

“We lost four crucial players, but we are looking ahead. Bailey has tremendous experience and had a very successful season before last. He can contribute to the leadership group,” said Iyer.

RPS also roped in Australia’s rising T20 opening batsman Usman Khawaja for the rest of Vivo IPL 2016 edition. The replacement of Mitchell Marsh will be announced in two days.