India and Bangladesh are set to met in the final of Micromax Asia Cup 2016 on March 6 at Shere Bangla cricket stadium in Mirpur. It will be first occasion when Bangladesh and India will be playing against each other in an Asia Cup final in past 12 editions of tournament. India won all the matches of Asia Cup so far whereas Bangladesh lost only one game in the event which was against India.

It will be a great contest between these top 2 teams of Asia. Men in Blue are in tremendous form and they have got 100% success ratio in this 13th edition of Asia Cup so far. Dhoni army won all 4 games against Bangladesh, Pakistan, Sri Lanka and UAE to make their their entry in Asia Cup final. On the other hand, Bangladesh team beat Sri Lanka, Pakistan and UAE to seal their asia cup final spot for the second time in the history of championship. 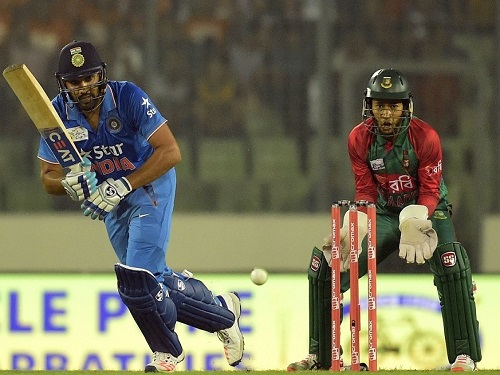 Last meeting between these two teams, was the opening match of Asia Cup in which India beat Bangladesh by 45 runs. Since than tigers have been performing consistently in the competition. First they got morale booster win against United Arab Emirates by 51 runs and then registered their first ever victory against Sri-Lanka in an international T20 match.

After this in a do and die game against Pakistan, Bangladesh secured 5  wickets win to make their way towards the final of tournament. Hosts are quite depending on their bowling as Al Amin, Mortaza, Shakib Al Hasan and Taskin Ahmed have been picking crucial wickets for the side and restricting opposition on a small total. Batting has been improving day by day and some of the top order players like Sabbir Rahman, Mushfiqur Rahim, Soumya Sarkar have been doing great for the side.

In the lower order middle order, Mahmudullah and Shakib Al Hasan have been scoring runs at good pace and leading the team towards the win. All these will be crucial players if Bangladesh wants to beat strong Indian team and win Asia Cup before heading toward ICC World T20 2016.

On the other hand, Men in Blue have been playing some great cricket in this 2016 year. The fact is India haven’t loss single T20I that they played outside India. In played their last 10 twenty20s, they only lost 1 match. So they are very strong side and will be favorite to win Asia Cup 2016. Rohit Sharma and Virat Kohli are in sensational form. Yuvraj Singh’s return to his vintage form is surely a big benefit for Indian team.

In the bowling department, Ashish Nehra’s experience and young Jasprit Bumrah and Hardik Pandya have been doing great for men in blue since Australia tour. These three along with spinners Ravichandran Ashwin and Ravindra Jadeja have made, MS Dhoni and team management believed that team can win the match with the help of bowlers too.

India will be favorites to win this 2016 Asia Cup. As per Twenty20wiki.com’s prediction, India has got 75 percent winning chances against Bangladesh.