Vivo Indian Premier League 2017 points table topper Mumbai Indians are set to take on tally’s second position holder Rising Pune Supergiant in the first qualifier of IPL-10 playoffs on Tuesday. Rohit Sharma and Steve Smith are the captains of respective MI and RPS teams in the crunch game as winner of the match will qualify for final to be played on 21st May. 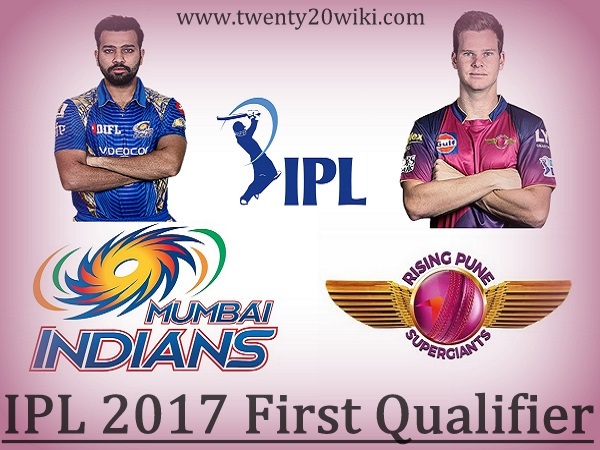 Let’s have a look at the probable playing line-up for MI vs RPS 1st qualifier match of Vivo IPL 2017 at Wankhede Stadium in Mumbai.

Mumbai Indians are having good quality and settled batting and bowling lineup in context for the game. Let’s have a discussion about MI’s expected playing eleven.

Indians have got good opening pair as Parthiv Patel and Lendl Simmons are having a good time in the competition. Both players have done good in the tournament so far. Middle order looks good as Rohit Sharma, Ambati Rayudu, Kieron Pollard and Hardik Pandya have performed exceptionally well in the 10th Indian Premier League so far. These guys will be key cricketers in the 1st qualifier.

Mumbai Indians have got some serious fast bowling options in the squad. Mitchell McClenaghan, Mitchell Johnson, Jasprit Bumrah, Lasith Malinga are the top pace bowlers in MI roster who got the chance in this season and have delivered well in the tournament. Harbhajan Singh is the premium spin bowler meanwhile trio Hardik, Krunal and Pollard are the vital all-rounders in playing line-up.

RPS have got tremendous players in the team but some of them have not played at their potential the way they have to be. Let’s find out more about Pune’s projected playing lineup for vital 1st qualifying match of IPL 2017.

India’s domestic player Rahul Tripathi has grown very well in this year’s Indian Premier League edition. He’s provided some solid starts for Supergiant and gonna be key player at the top. Ajinkya Rahane has to play solid innings that will definitely boost Pune’s chances in first qualifier. Skipper Steve Smith will have to play good knock against strong Mumbai roster.

Obviously team is going to miss all-rounder Ben Stokes who has left the team to follow national duties for England cricket team. He’s been tremendous cricketer and team will surely be missing his batting and bowling skills. Finisher MS Dhoni has to put socks up and bat well to handle pressure of the game in middle overs.

One more Indian youngster has done well for Pune Supergiant. Jaydev Unadkat is the second leading wicket taker in the IPL 10th edition. He will definitely be crucial for Pune on Wankhede’s batting paradise wicket. Christian, Zampa and Sundar to be key bowlers in middle order. All-rounder Rajat Bhatia to get the chance to replace Stokes in the RPS playing XI.

Let’s have a look at the probable playing lineups.

What do you think about Mumbai vs Pune 1st qualifier predicted playing 11s? What’s your probable playing line-up for first qualifier of IPL 2017? Share your thoughts in comment section.