Libra Legends are scheduled to play their first match of 2016 Oxigen Masters Champions League against Gemini Arabians on 28 January in Dubai International Stadium. Sourav Ganguly is appointed the captain of Libra Legends team and will be leading the side in first MCL edition. 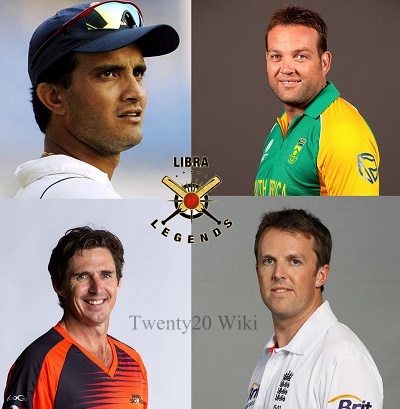 Apart from Sourav Ganguly, there are some top cricketing legends will be playing for Libra Legends in the competition. One of the greatest all-rounder of world cricket, Jacques Kallis will join Ganguly side along with Australian geeks Brad Hogg and Shaun Tait. England’s Graeme Swann, Michael Lumb and Ryan Sidebottom are also the part of Libra Legends in Oxigen MCL.

Let’s have a look at the complete list of players and full squad of Libra Legends for first Masters Champions League season.

The matches of MCL will be televised on SONY SIX in Indian sub-continent.