Two days PSL Players draft has been concluded and we have got the final squads of all 5 Pakistan Super League franchise based teams for the first season of tournament in February. Quetta Gladiators (QG), Karachi Kings (KK), Islamabad United (IU), Peshawar Zalmi (PZ) and Lahore Qalandars (LQ) are the five teams which will be competing in the 2016 PSLT20 starting from 4th of February in UAE. 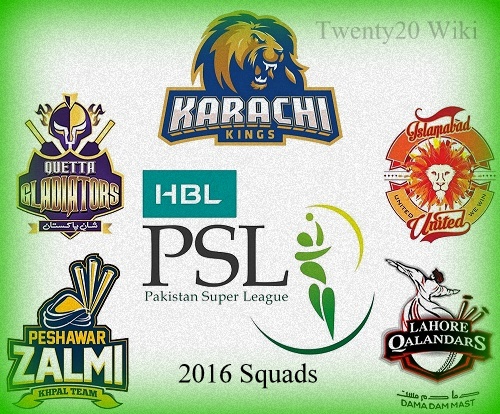 A total of 98 players selected out of enrolled 307 cricketers in the players draft held on 21 and 22 December 2015. The players were divided into five categories named Platinum, Diamond, Gold, Silver and Emerging. Each team selected 3-3 players each from Platinum, Diamond and Gold categories on Day-1 of draft. On day-2 of draft teams elected 5 cricketers from Silver whereas 2 from Emerging category.

Each team got 16-member full time squad that will be available for all matches. Rest 3-4 players in the squad are categorized into Supplementary draft, it means these players will travel to UAE when the teams require them. Let’s have a look at the team squads for PSL 2016.