Sagittarius Strikers are scheduled to take on Capricorn Commanders in the fifth match of 2016 Masters Champions League on 30 January in Dubai. This weekend match in MCL will kick off at 19:30 local time, 15:30 GMT and 21:00 IST. 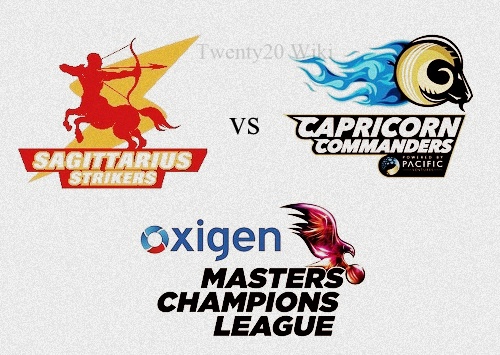 It will be an interesting contest as some of the legendary cricketers who shared the same dressing room for respective national teams will now be up against each other. Australian Adam Gilchrist is playing for Strikers whereas Andrew Symonds will be representing Commanders. Paul Collingwood and Jonathan Trott will also be facing each other in the fifth game of tournament.

Ashwell Prince and Andrew Symonds provided solid start in the last match against Leo Lions and added 50 plus runs for the first wicket. Capricorn Commanders will be depending on once again them to provide good start against experienced bowling line-up insights of Shane Bond, Daniel Vettori, Mushtaq Ahmed and Tino Best.

As per Twenty20wiki predictions, Sagittarius Strikers will be favorite to win and they have got 55 percent win chances over Capricorn Commanders.

The live telecast of Capricorn vs Sagittarius match-5 will be aired by Sony Six and Sony Six HD in Indian sub-continent region that includes nations like India, Sri Lanka, Nepal, Bhutan, Afghanistan. Match will start at 9:00 PM as per Indian Standard Timings. SonyLiv.com will stream live match.

Pakistan based fans can tune to Geo Super or PTV sports to watch the live broadcast of match. UK based viewers will be able to watch the match on Sky Sports digital platforms.

Oxigen Masters Champions League official website, espncricinfo and cricbuzz are the reliable sources to get live score and latest updates of 5th match in MCL 2016 between Sagittarius Strikers and Capricorn Commanders.