In an exciting last ball decider world t20 warm-up match against India, South Africa have registered 4 runs victory on Saturday. It was really a great practice game for both sides as Proteas and India got enough opportunity to bat throughout the 40 overs of the game and had a look how the preparations were going on. 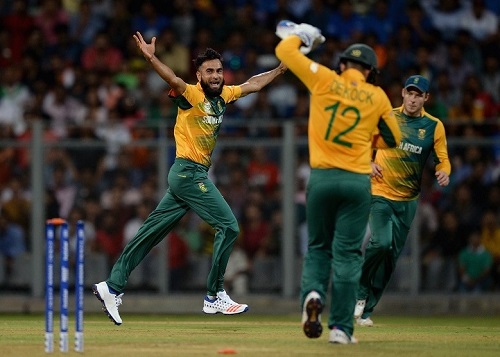 Winning the toss, South Africa chose to bat and put up a great show against inform Indian team. Proteas lost first two wickets in just 4 overs of the match as Amla and du Plessis were sent back by Bumrah and Shami. Quniton de Kock and JP Duminy took responsibility to go after Indian bowling and start dealing in boundaries. Both players scored their respective fifties and took team’s total past 150.

South Africa put up 196 runs for the loss of 8 wickets in 20 overs. Duminy made 67 whereas de Kock played 56 runs innings in all this vital practice match. In the chase of 197 runs target, Men in Blue got bad start at Rohit and Kohli were dismissed in first three overs of the match. Ajinkya Rahane was also dismissed by Imran Tahir in 7th over. After this Suresh Raina and Shikhar Dhawan took incharge. Both players were brilliant and scored good runs.

Dhawan made 73 runs before getting retired hurt whereas Raina scored 41 runs. MS Dhoni and Yuvraj Singh tried hard to win the match but fallen short by 4 runs in the last over. Hence Proteas registered a morale booster win against India. Men in Blue will play the opening match of super-10 round on 15th march against New Zealand.