Struggling St. Lucia Stars will be aiming to register their first victory in Hero Caribbean Premier League 2017 when they’ll be playing against Barbados Tridents in the 27th match of season tonight. St. Lucia and Barbados have already been out from the race of CPLT20 playoffs qualification. So both sides will compete for their pride and reputation.

St. Lucia were beaten comfortably by Tridents in the 8th match of championship before few days back. Barbados made brilliant 196 runs and then restricted St. Lucia to 129 to win the match easily. Skipper Kieron Pollard played a brilliant knock that helped the side to post the score. Hence he’ll be crucial once again. 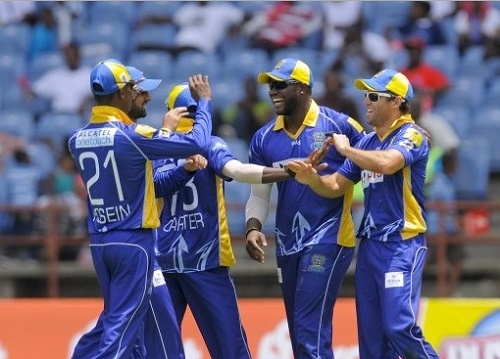 If we actually look at closely both teams’ rosters, we’ll find that Stars have got good batting lineup compared to Tridents but they have been failed throughout the tournament. However Barbados have also got dangerous line-up that includes skipper Pollard, Williamson and Smith.

Barbados pitch is not having good pace which will trouble batsman to score runs. However we can witness a close game in this 27th match of Caribbean premier league 2017. Team batting first may post around 170 runs on this wicket.

Home team Saint Lucia is looking weak against Barbados Tridents and Tridents are favorite to win tonight’s match. As per www.twenty20wiki.com’s predictions, Barbados have got 60 percent winning chances over Stars.