Zimbabwe pulled off a stunning one-run upset over Pakistan on Thursday to put the Asian giants in danger of an early exit from the Twenty20 World Cup.

Zimbabwe were restricted to 130-8 after electing to bat first but their bowlers choked Pakistan to 129-8 for a memorable win in the Super 12 match in Perth. 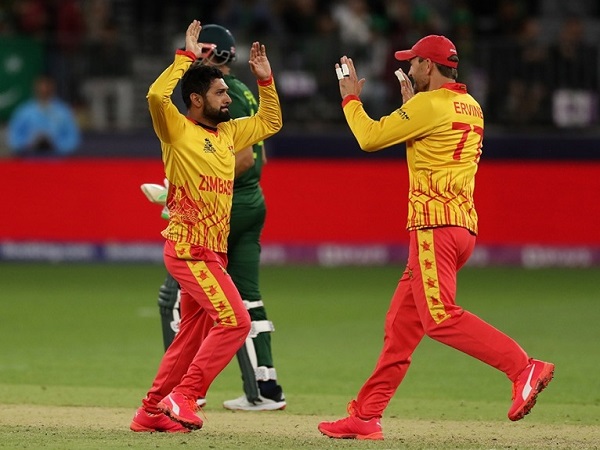 It was Pakistan’s second straight loss after their agonising, opening defeat to arch-rivals India, who top the group with two victories out of two.

Zimbabwe, who came through the first round in Australia to reach the Super 12, are third in Group 2 behind South Africa.

Only the top two reach the semi-finals.

Pakistan’s chase looked on course when Shan Masood, who made 44, put on a 52-run fourth-wicket partnership with Shadab Khan.

But Sikandar Raza broke the stand with Shadab’s wicket and was to be Pakistan’s tormentor-in-chief, returning figures of 3-25.

Raza, a finger spinner, then trapped Haider Ali lbw on the next ball for nought to be on a hat-trick that was averted by Mohammad Nawaz.

Raza soon took down Masood (44 of 38 balls) and Nawaz attempted to get the remaining runs, 11 off the final over, but was run out on the penultimate ball of the 20th over.

Needing three on the final ball, new batsman Shaheen Shah Afridi ran one but got run out when running for the second as Zimbabwe’s players erupted in celebration.

Earlier, skipper Babar Azam got off the mark with a boundary after seven dots but soon got out to Brad Evans to extend his bad run in the tournament. He fell for a duck against India.

Mohammad Rizwan hit a four and a six but followed his partner back to the dug out after chopping an in-coming delivery from pace bowler Blessing Muzarabani on to his stumps.

Pakistan were in trouble at 36-3 when Luke Jongwe sent back Iftikhar Ahmed for five with his medium-pace bowling, before Shan and Shadab pulled things back for a while.

Zimbabwe’s openers Wesley Madhevere and skipper Craig Ervine had used the pace of Pakistan’s seamers to good effect with a string of boundaries in a 42-run stand.

But Shadab’s 3-23 with his wrist spin and pace bowler Mohammad Wasim’s 4-24 held Zimbabwe — whose opening match in the Super 12 in Hobart was a washout — to what seemed a below par total.