Afghanistan cricket team has created history in ICC world Twenty20 as they have defeated Zimbabwe in their last group-B match to reach in the super-10 round. Afghanistan won by 59 runs to knockout Zimbabwe first time so early from the t20 event. Afghani team will now play Sri Lanka, South Africa, England and West Indies in Group-1 matches of super-10 in 2016 world twenty20.

This was a crucial match for both the teams as Zimbabwe and Afghanistan won their first two games in the tournament and winner of today’s match would progress for next wt20 round. Afghani team took their opportunity and won the match. From starting of this knockout clash, Stanikzai team was on the top as captain won toss and chose to bat. 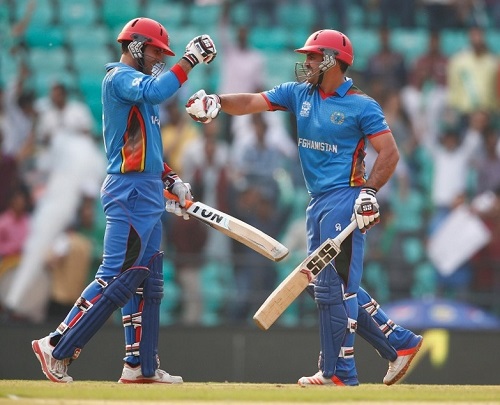 On this batting surface, Afghanistan batsmen posted 186 runs on the scoreboard which was quite very big for Zimbabwean side. Mohammad Shahzad provided brilliant start as he smashed 40 runs in just 23 balls. After his wicket fallen, Afghanistan lost 4 quick wickets and team was struggling at 63-4 in 8 overs. Samiullah Shenwari and Mohammad Nabi took responsibility and built 98 runs record partnership for Afghanistan in this match.

Mohammad Nabi made 52 runs in 32 balls whereas Shenwari played 43 runs innings to lead the side towards massive total of 186 runs in this knockout clash. In reply to this total, whole Zimbabwe team got all out in 19.4 overs after putting 127 runs on the board. Hence Afghanistan registered 59 runs victory and through to second round of world twenty20 championship.

Nabi was awarded man of the match for his brilliant half-century. Afghanistan will now play first super-10 game against Sri Lanka on 17 March. After winning the match, Nabi credited coach Inzamam Ul-Haq for his inning. He said, “Coach [Inzamam] told me to take singles until the 14th over and then the last six can be used for big hits.”