The second T20 match of Oxigen Masters Champions League 2016 is scheduled to play between Capricorn Commanders and Leo Lions on 29 January at Dubai International Cricket Stadium. The match will start at 15:00 local time, 11:00 GMT, 4:30 IST and 4:00 PST (Pakistan Time). 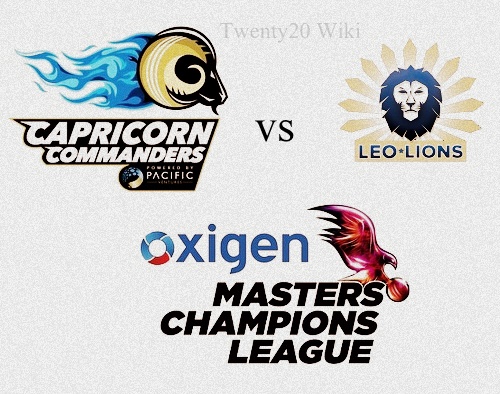 West Indies’ cricket legend Brian Lara and England’s 2010 world t20 winning team captain Paul Collingwood will be up against each other as they are leading respective Leo Lions and Capricorn Commanders team in the competition.

Capricorn Commanders will be highly depending on skipper Collingwood, former Australian all-rounder Andrew Symonds and Pakistan’s Abdul Razzaq. Team also rely on Michael Vaughan who is a part of commanders camp as player and director coach. Geraint Jones, Ryan McLaren and Ben Laughlin will be the front line bowling options for Collingwood against Lions.

Let’s have a look at the expected playing 11 line-ups for both teams.

Leo Lions will be favorite to win as per Twenty20wiki.com predictions. They have got 60 percent winning chances over Capricorn Commanders.

Sony Six is the official broadcaster of Oxigen Masters Champions League 2016, hence it will bring live coverage of 2nd MCL match between Leo Lions and Capricorn Commanders on Friday from 4:30 PM in India and other sub-continent parts.

Pakistan based fans and viewers will be able to catch the live broadcast of Commanders vs Lions match on PTV and Geo Super network from 4:00 PM Pakistan time. United Kingdom based fans can tune to Sky Sports to watch the live cricket match.

SonyLiv is the official live streaming and broadcasting partner on digital platforms hence it will stream Leo Lions vs Capricorn Commanders live in India. On the other hand, Sky Sports to air live match online on their digital platforms.

The live score of Lions vs Commanders match can be taken from official MCL2020 website and cricbuzz.com.

What do you think about this match-2 in MCL 2016? Who will win Capricorn Commanders or Leo Lions?