Finally the ICC World Twenty20 2016 broadcasting rights issue resolved in Australia as Channel 9 and Fox Sports are set to air live cricket matches of the championship schedules to play from 8 March to 3 April. All 35 men’s games of sixth t20 world cup will be televised on Fox Sports whereas Channel 9 to telecast all Australian matches and finals of WT20. 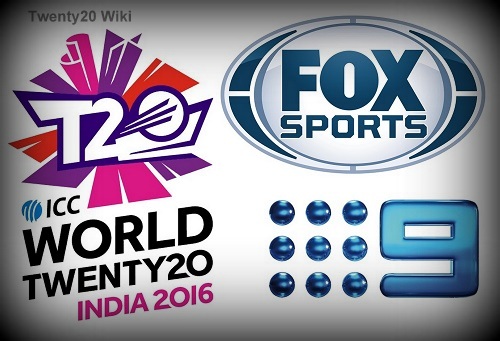 The deal made between two television networks is just like it was for 2015 cricket world cup. However there is no information provided regarding the broadcast of women’s world t20 in which Australia women’s team is three time title defenders. It is still due to announce which wwt20 matches will be televised in the country but Fox Sports has made sure that it will air 10 women’s t20 world cup games. Hence we can hope that Meg Lanning’s team matches and finals will be shown by Fox Sports and maybe from Channel 9.

Fox Sports live coverage schedules to kicks off on March 8 with opening double header first round matches between Hong Kong and Zimbabwe and then afterwards Scotland vs Afghanistan. The broadcasting network has promised that there are no ad breaks during the play. Subscribers of Fox Sports will get an opportunity to watch world t20 in high definition.

On the other hand, Channel 9 is set to air live coverage of all Australian men’s cricket team matches that are scheduled to play on 18, 21, 25 and 27 March. It will also telecast both semi-finals on 30 and 31 March following final on 3 April. Michael Clarke, Ian Chappell, Mark Taylor, Ian Healy and Brett Lee will be in CHannel 9’s commentary box during the sixth edition of t20 cricket world cup.

The online coverage of ICC World Twenty20 2016 will be provided by cricket.com.au in Australia. You can go to cricket.com.au official site to get latest updates, breaking news, live score, teams and players indepth analysis throughout the competition.