Hobart Hurricanes are set to take on Sydney Thunder in the 20th match of KFC Big Bash League 2016-17 on 8 January at Blundstone Arena in Hobart. Hurricanes vs Thunder live cricket match is scheduled to begin at 19:10 local time, 8:10 GMT and 13:40 IST. 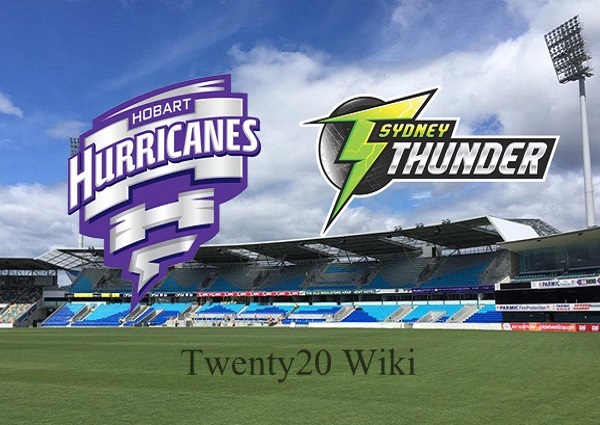 Sydney Thunder will be aiming to register their first ever win against Hobart Hurricanes on Saturday as Hurricanes have been undefeated against Thunder in previous 5 editions of BBL championship. Five times these two sides have faced off each other till date and ever time Hobart succeeded to beat Thunder.

In this year’s edition Hobart Hurricanes have done quite well, at least better than title defenders Thunders. Both Hurricanes and Thunder have played 5-5 games each and Hobart won two meanwhile Thunder just 1. Last big bash winner Thunder got two new faces in the squad as Carlos Braithwaite and James Vince have arrived to Australia.

Eion Morgan left for India to fulfill national duties. Shane Watson side needs to bat and bowl really well to keep the hopes alive in the tournament. On the other side, Hobart are depending a lot on Sangakkara, Bailey, Pained, Tait and Broad to perform well in the series.

Hobart Hurricanes are looking favorite to win against Sydney Thunder and as per our predictions, they have got 66 percent winning chances.

The live cricket match score of Hurricanes vs Thunder match-20 will be provided by espncricinfo.com and cricbuzz.com.