The fifth match of HBL Pakistan Super League second edition has been scheduled to play between Karachi Kings and Quetta Gladiators on 11 February 2017 at Dubai International Stadium. Karachi Kings vs Quetta Gladiators live cricket match telecast and streaming to be aired on PTV Sports, Youtube from 16:00 GMT, 21:00 PST and 21:30 IST. 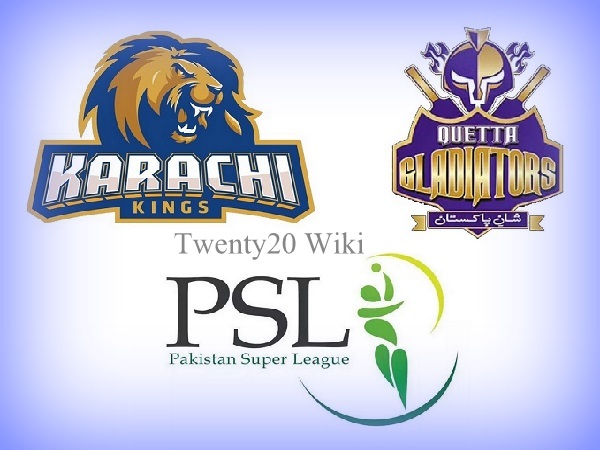 Last year finalist Quetta Gladiators started off their season very well other night when they beat Lahore Qalandars in a close match by 8 runs. In low scoring match, Gladiators just managed to put 136 runs on the board but bowlers did fantastic job and helped team to register first win of the tournament.

On the other side, Karachi will be depending on skipper Kumar Sangakkara, Gayle, Bopara and Malik to score quick runs. Team has got some brilliant bowlers like Sohail Khan, Mohammad Amir and Imad Wasim. Kieron Pollard will be key all-rounder if he gets play.

Quetta Gladiators are looking favorite to win against Karachi Kings in the fifth game of PSLT20 second edition. As per our predictions they have got 60 percent winning chances.

The live stream of Quetta Gladiators vs Karachi Kings 2017 HBL Pakistan Super League 5th match can be watched online on official youtube channel of PSL. PTV Sports and GEO Super to provide exclusive coverage of the tournament in Pakistan region. World wide live streaming of the game will be aired on cricketgateway.com.

The live cricket match score of Karachi Kings vs Quetta Gladiators 2017 Pakistan Super League game-5 will be provided by cricbuzz.com and espncricinfo.com.