The players draft for second Pakistan Super League season took place on 19 October 2016 in Dubai. Players were divided into 4 categories Platinum, Diamond, Gold and Silver. Lahore Qalandars who stood last in the inaugural championship, they picked 20 players first in the draft. Hence they picked first player of 2017 PSL draft and they chose to go with Brendon McCullum from Platinum category. 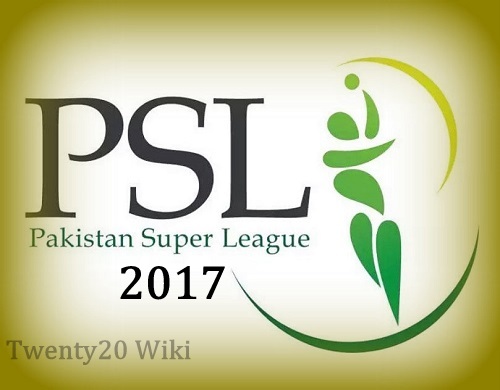 Just like first edition of Pakistan Super League, there will be five teams competing in the next PSL event. Islamabad United won 2016 tournament, hence they’ll be title defenders. As per initial reports, Sialkot franchise was also expected to be launched for 2nd PSL twenty20 season but it didn’t happened.

Let’s have a look at the playing teams in Pakistan Super League 2017.

The schedule and dates of 2017 PSL were announced on 2nd of November 2016. Opening match of championship will be played on 9 February between Islamabad United and Peshawar Zalmi in Dubai. The final of Pakistan Super League second season will be played in Lahore on 5 March.

Pakistan based cricket fans can enjoy domestic t20 cricket league PSL on three broadcasting networks PTV Sports, Geo Super and Ten Sports. The list of broadcasters and tv channels is given below.