Masters Champions League is kicking off on 28 January with an opening match at Dubai International Cricket Stadium. Gemini Arabians are scheduled to play Libra Legends in the match-1 of MCL 2016. The match has been scheduled to kick off at 19:30 local time and 15:30 GMT. 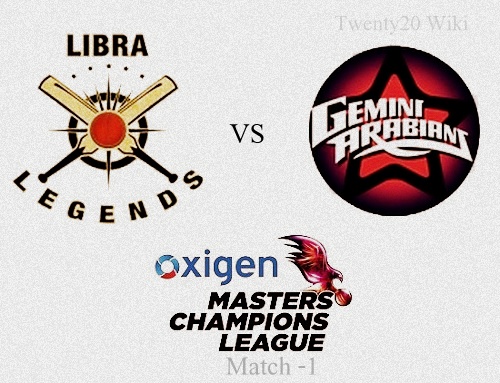 It will be an interesting tournament to watch and lots of retired cricketers will be participating. The first match will consist top players like Virender Sehwag, Kumar Sangakkara, Brad Hodge, Jacques Kallis, Ryan Sidebottom, Brad Hogg and more players.

Gemini Arabians team will be highly depending on top order batsmen Virender Sehwag, Kumar Sanagkkara and Brad Hodge. It is expected that Richard Levi will open the innings with Sehwag. Muttiah Muralitharan, Paul Harris and Saqlain Mushtaq may play as spinners in the match for Gemini whereas Rana Naved and Kyle Mills will be front line pacers.

Libra Legends will be highly depending all-rounder Jacques Kallis who arrived UAE from Australia after winning the Big Bash League for Sydney Thunder. Michael Lumb, Graeme Swann and Brad Hogg will be crucial players for Libra Legends in the match. Jacques Kallis will be leading legends side as Sourav Ganguly is out from the tournament due to injury.

Let’s have a look at the expected playing 11 for Libra Legends vs Gemini Arabians.

Gemini Arabians will be favorite to win the opening game of tournament and they have got 65 percent winning chances over Libra Legends.

India based viewers will be able to watch the live telecast of Arabians vs Legends match on Sony Six and Son Six HD from 21:00 IST. Fans in Pakistan can tune to PTV or Geo Super to catch the live action on television sets from 8:30 PM Pakistan time.

Middle East viewers will be able to watch the live broadcast of game-1 on TEN Sports whereas SuperSport will bring live coverage in South Africa. Caribbean fans can tune to Sportsmax to catch the live action of first MCL 2016 match on Thursday.

Sky Sports will be telecast live match in United Kingdom.

Libra Legends vs Gemini Arabians match-1 live streaming can be watched online. SonyLiv.com will stream live MCL 2016 matches online in Indian sub-continent as it has bought the official broadcast streaming rights. Fans in UK can go to Sky Sports digital platforms to watch the live stream of MCL games.

The live score of first Masters Champions League match between Gemini Arabians and Libra Legends can be taken from espncricinfo.com and cricbuzz.com.