Visitors Gujarat Lions will surely be looking to get back on winning ways as they lost previous 2 games successively which was not expected from them. Gujarat batting has struggled a lot in previous two matches and they failed to touch 150+ runs mark whether it’s chasing or setting the target for opposition. Dwayne Smith and Brendon McCullum have been failing to provide good start while skipper Suresh Raina, Ishan kishan, Jadeja and Bravo have been failing to score runs. 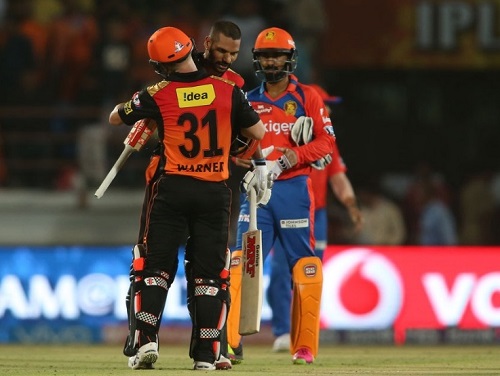 On the other hand, Sunrisers Hyderabad have been relying on captain David Warner and Kane Williamson to score runs. While they have been expecting Shikhar Dhawan to score at least some runs to save his position in the side. Yuvraj Singh is still getting fit to play in the tournament and won’t be available for Friday’s match.

Sunrisers Hyderabad are favorites to win and they have got 55 percent winning chances over Gujarat Lions in the ninth edition of IPLT20 match-34.

India based fans can watch live broadcast of SRH vs GL t20 match on Sony Max, Sony ESPN and Sony Six/HD from 8:00 PM IST. The live stream can be watched on mobiles and tablets through hotstar app.

United Kingdom based viewers can tune to Sky Sports 1/HD to catch the live broadcast of 34th match. To watch live streaming one UK viewer can go to www.skysports.com.

The live score of Sunrisers Hyderabad vs Gujarat Lions T20 match of Vivo IPL 2016 can be taken from iplt20.com, espncricinfo.com and cricbuzz.com.