Two former champions of ICC World Twenty20 trophy India and West Indies are set to play against each other to make their way for final again and get closer to win WT20 championship again. The 2nd semi-final of T20 cricket world cup will be hosted by Mumbai’s Wankhede stadium on 31st March. The match will begin at 19:30 local time.

The Caribbean team won t20 world cup in 2012 whereas Men in Blue became world champions in the inaugural edition of tournament in 2007. This is the first time when both teams are facing each other in a knockout match of WT20 tournament history.

Dhoni & Company is coming in semi-final from winning three successive group matches against Pakistan, Bangladesh and Australia whereas West Indies lost their last group match against Afghanistan but beat Sri Lanka, South Africa and England to qualify for semis. Indian team played two semifinals before in wt20 and never lost single of them. On the other hand, West Indies lost 2 semis out of played 3 knockouts in tournament’s history. 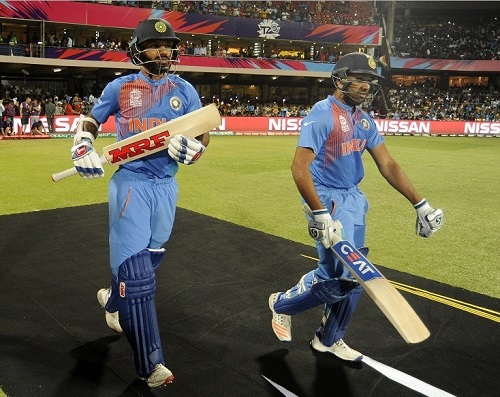 India has played some great cricket after losing opening game against New Zealand. Hosts registered comfortable win against arch rivals Pakistan but beat Bangladesh and Australia in a nail biting finish. The main issue with Indian side is that their top order is not scoring runs apart from Virat Kohli. Rohit Sharma, Shikhar Dhawan and Suresh Raina have not scored runs yet in the championship but they will be looking to make big runs on this Wankhede’s pitch which is favorable to batsmen.

Yuvraj Singh got injury in previous match which ruled him out from the competition. Hence it has enforced MS Dhoni to make changes to playing XI. Ajinkya Rahane or Manish Pandey is expected to play against West Indies on 31st March. Bowling has been good for Men in Blue whether it’s fast or spin bowling. Ravichandran Ashwin, Ashish Nehra, Jasprit Bumrah and Ravindra Jadeja have done good so far but it can be a tough day for them on Mumbai’s pitch.

On the other hand, West Indies didn’t expect that they would lose against minnows Afghanistan in the last group match after defeating South Africa, England and Sri Lanka. Team relies a lot on destructive opener Chris Gayle who smashed century against England in the chase of 183 runs target on this same Wankhede’s pitch. Hence he’ll be a crucial player for Men in Brown.

West Indies have got one more big player in the side as the replacement of Andre Fletcher. Lendl Simmons is included the side after getting fully fit. Simmons is very familiar with Wankhede Stadium and conditions as he is used to play home games on this ground for Mumbai Indians in IPL. It will be interesting to watch out how West Indies team performs in semi-final as they are an unpredictable side.

Pitch: Wankhede’s pitch looks pretty good to bat on and it will be a high scoring semi-final between India and West Indies. The average score for batting first team in T20s is around 180 runs on this Mumbai’s Wankhede wicket. Hence we can expect the same for Thursday’s knockout.

Win Prediction: Indian team will be favorite to win against West Indies in the 2nd semifinal of world t20 2016. As per our predictions, India has got 60 percent winning chances.