The fourth edition of Caribbean Premier League is also known as Hero CPL 2016 to be played between 29 June and 7 August. Six franchise based clubs will be playing in the tournament just like previous years. Trinbago Knight Riders is the new team in the competition which was previously known as Trinidad & Tobago Red Steel. Red steel won 2015 Caribbean Premier League. 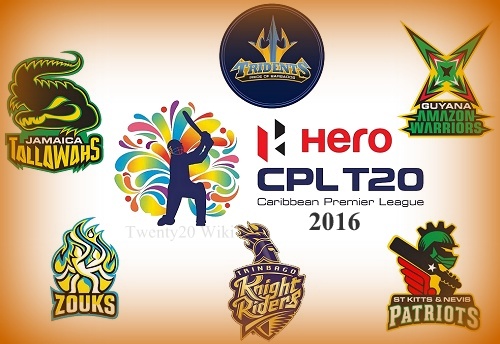 The CPL players draft took place in mid February 2016 in which more than 300 cricketers were drafted. This was the first occasion when tournament management introduced marquee players system in which each franchise had an option to sign 1 international player as marquee player.

This is the first occasion when United States will be hosting few matches of Hero Caribbean Premier League. 7 territories to host CPL 2016 matches  Fort Lauderdale of USA is the newest venue to be added in the tournament organizers history.

The 4th edition of CPLT20 will be played from 29 June to 7 August. The complete fixtures of tournament haven’t been announced. However St. Kitts, St. Lucia matches and the USA leg’s six matches dates have been declared.

The live broadcast of Hero Caribbean Premier League will be aired across the globe throughout various networks. The complete list of CPL 2016 tv channels here.