Stealing win from Royal Challengers Bangalore in the last game, Kolkata Knight Riders will be looking to return on winning ways again as they are scheduled to take on Kings XI Punjab in their next match of IPL-9 on 4th May. It will be an exciting game as KKR to play this match at home while KXIP can surprise Knight Riders as Murali Vijay & Co beat tournament’s top team Gujarat Lions in the last match.

KKR were terrific in the last game even though lost 4 wickets on the score of 69 while chasing a big total of 180+ against Royal Challengers Bangalore. Andre Russell and Yusuf Pathan did a fantastic job and built solid partnership that led Knight Riders to win the game. Now Kolkata will play at home where lots of fans support them from stadium which really a plus point for them. 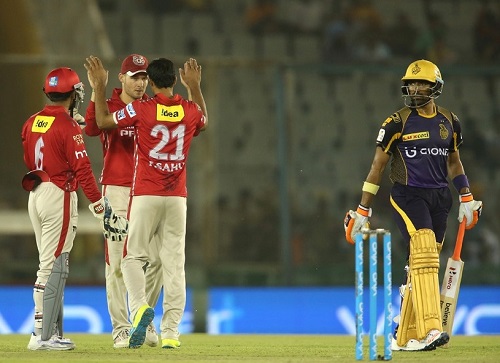 Eden Gardens pitch and wicket looks familiar and supportive to spinners. Hence Sunil Narine and Piyush Chawla can be handy bowlers for Gambhir & company on Wednesday. Yusuf Pathan can also bowl 4 overs on this Kolkata’s pitch. But it can be back-fired for KKR as well as Kings Xi Punjab have got good spinning bowling options like Axar Patel who took IPL 2016’s first hat trick in the last match.

Kolkata Knight Riders are favorites to win and they have got 55 percent winning chances over Kings XI Punjab in the 32nd game of Vivo Indian Premier League twenty20 2016 season.