2016-17 big bash league title defending champion Sydney Thunder is all set to take on Melbourne Stars in the 16th match of tournament on 4 January at Spotless Stadium in Sydney. Thunder vs Stars live streaming and telecast has been scheduled to begin at 19:10 local time, 8:10 GMT and 13:45 IST. 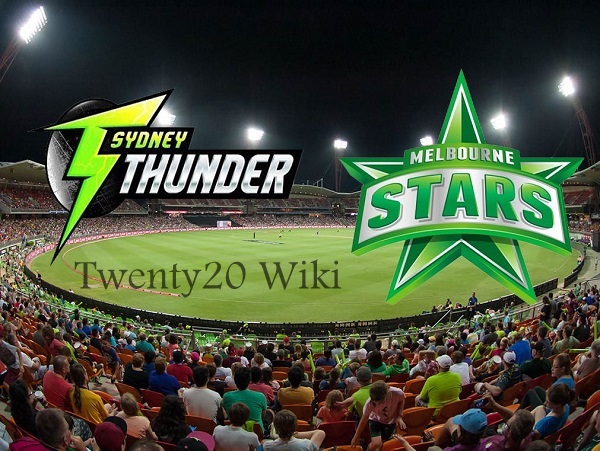 Finalists of 2015-16 KFC Big Bash are set to meet each other in the sixteenth game of sixth bbl edition on 4th January. Last year these two met in the final in which Sydney Thunder beat Stars to win the maiden title. This year, Stars will be looking to take revenge of that defeat from Thunder on Wednesday.

It seems like Melbourne Stars have got advantage a bit over Thunder in this season as title defenders have lost all 4 matches played so far in the league meanwhile Stars won 1 game before losing Derby against Renegades.

Thunder’s Eoin Morgan will play his last game for this season tomorrow as he’ll leave for India to fulfill national duties for England. He is the only batsman who has shown some character for Thunder in the league so far. James Vince will be replacing him in next matches after Stars game.

On the other side, Melbourne Stars are ready to beat Thunder in Wednesday’s match. Cameron Gannon is replaced with Seb Gotch in 13-man Melbourne roster. Glenn Maxwell, James Faulkner, Luke Wright, David Hussey are the key players in Stars team.

Melbourne Stars are looking favorite to win this contest and as per our predictions they have got 65 percent winning chances over Sydney Thunder in the 16th match of BBL-06 on January 4.

The live cricket match score of Sydney Thunder vs Melbourne Stars 2016-17 will be provided by espncricinfo.com and cricbuzz.com.