The 2016 ICC World Twenty20 final battle will be to win the second wt20 trophy ever in the history of championship. West Indies (2012) and England (2010) have already won world t20 trophies and will look to become first team to win two Twenty20 world cups.

The history suggests that England has no chance to beat West Indies in the final as The Caribbean team has beaten English side in all their previous 4 head to head meetings in world t20 championship. The two teams played against each other in the group stage also in which West Indies trashed England by chasing 183 runs target in Wankhede Stadium. Chris Gayle hit the century in that match. 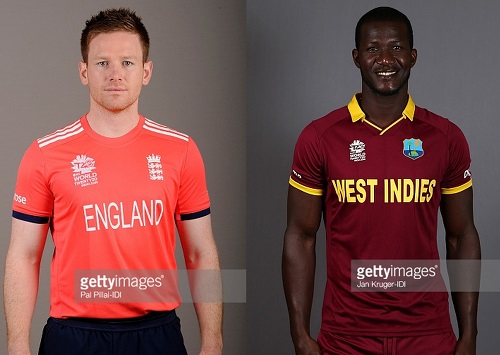 West Indies are coming from defeating hosts India in the semi-final whereas England beat New Zealand in the semi-final to confirm berth in the final. It is definitely going to be an exciting thriller as both sides are having great batting line ups, eventually destructive batting line-ups.

England have got Jason Roy and Alex Hales at the opening slot. Although Hales hasn’t played as per his potential in the tournament so far but can be very dangerous. On the other hand Jason Roy is the second highest run scorer for England in this world t20 event. Joe Root plays at third position and is the leading runs scorer for English team in the competition.

Joe Buttler and Eoin Morgan are crucial in the middle overs and both players have done good job for the side at some instant in the sixth ICC World T20 event. On the other hand, West Indies team are highly depending on their destructive opening pair Chris Gayle and Johnson Charles who have played some great innings in the tournament to take team towards final.

Lendl Simmons’ inclusion in the last match and the innings he played in the semi-final against India, was really important and has given confidence to the side that he can play such kind of innings in the middle overs too. Darren Sammy and Andre Russell are too destructive and dangerous in the lower order. Hence it will be interesting to watch out who performs better on big occasion.

Pitch: Kolkata’s Eden Garden stadium supports both batsmen and bowlers. Spin bowlers play crucial part on this track and we cane expect the same for wt20 final on 3 April. The outfield is fast to too hence once batsman beats the fielder, ball will run away to the boundary.

Match Result Prediction: No doubt West Indies will give tough challenge to England but as per our predictions, England will be favorite to win 2016 twenty20 world cup and they have got 55 percent winning chances.